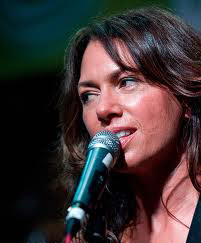 At the grandmotherly age of fifty-three, Susanna Hoffs looked and sounded last night at McCabe's as un-grandmotherly as it gets. Wearing a short dress, lots of smiles and no extra pounds, she delivered a pleasant set that included new songs, old Bangles gems, as well as a few well-chosen covers. The whole affair was quite casual, one might say exceedingly casual, which prompted my friend Bill to describe the show as a "paid rehearsal", a statement I suspect he made half in jest, half serious. I had no problem with the loose format of the evening, something that is not at all uncommon when a larger group of musicians assemble with little notice before a one-off event.

Susanna's band included guitarist-extraordinaire Val McCallum on acoustic and electric guitars, bassist Derrick Anderson, drummer Jim Laspesa, percussionist John Calacci and guitarist Andrew Brassell, her new Nashville-based musical collaborator. Guitarist Dennis Taylor joined the band toward the end of the show, he sounded great and so did everyone else. 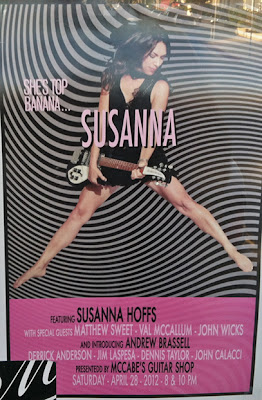 I liked most of Susanna's new songs, which I believe will be on her soon-to-be-released third solo album titled "Someday". Mitchell Froom, the album producer, was also present last night, but did not take the stage.

Age has done little to change Susanna's vocal abilities. Her still-Banglesque voice was the unmistakable star of the evening and so was her cheerfulness and charm. Exceptionally good was her song selection, too. Unlike other artists, Susanna did not deliver her new songs all at once. Instead, she combined them with well-known oldies and old Bangles tunes - this added color to her show and kept everyone sprinting along. Here's one of the two set lists that were left on the stage floor after the show: 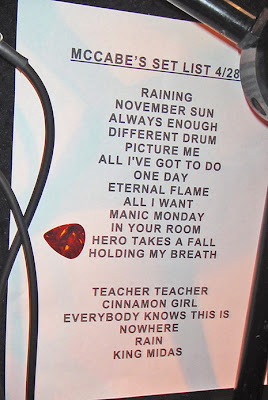 Note the presence of "All I've Got To Do" and "Rain", two Lennon-McCartney songs, the former sounding the best. I also liked the Velvet Underground's "Sunday Morning", Rockpile's catchy "Teacher, Teacher" and "All I Want", the semi-hit of the Lightning Seeds.


Quite predictably, longtime collaborator Matthew Sweet took the stage at the end of the show to lend his voice to the singing of "Rain" and Neil Young's "Cinnamon Girl".

Here's the other set list I was able to photograph after the show:


The show was opened by Englishman John Wicks, formerly of the Records. Surprisingly, he did not sing "Starry Eyes", the song that brought the Records their only hit. John's five-song set was just right in terms of length. The song that I liked the best was the set-closing "Chasing Angels". 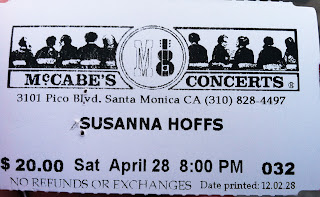