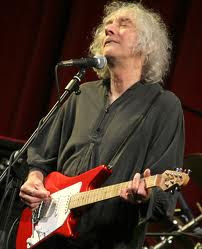 This was my second time to see the great Albert Lee in concert, both times at McCabe's. Musically speaking, the two concerts were nearly identical, yet I enjoyed the second show a whole lot more, thanks to the relocation of Albert's keyboards from the front of the stage to the side. The folks at McCabe's deserve kudos for having made the change and Albert himself deserves some credit, I'm sure.

Compared to the January show, there was only one minor set list change, the result of Alexandra's absence. Albert's selection and sequencing of songs was exceptionally good, with up-tempo numbers dominating the evening. With two exceptions, we heard nothing but American songs, many of them from the 1950s and 60s. The two exceptions were Paul Kennerley's "Spellbound" and Albert's own "Country Boy". By the way, Paul Kennerley was Emmylou Harris' third husband, they were married from 1985 to 1993.

Albert was in good vocal form and played his guitar like only he can. He did not talk a lot, but whatever he said was informative and to the point. Eric Clapton, Bill Wyman, Emmylou Harris and the Everly Brothers were all mentioned in a humble and appreciative way. 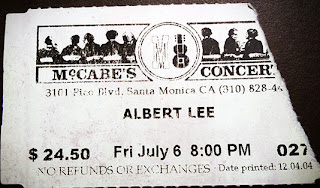