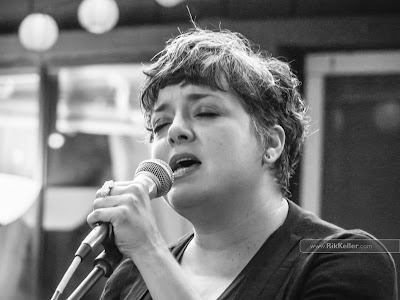 The motto of Kelly Hogan's concert last night at McCabe's was "Fail with gusto, rather than succeed with timidity", a phrase repeated by Kelly more than once. Yet there was not a trace of failure in anything she touched and how could she have failed with that gorgeous voice of hers and those great songs, most of which came from her new album, "I Like To Keep Myself In Pain", produced by the legendary Booker T Jones.

I got introduced to Kelly's music in the early 2000's, via my interest in Bloodshot Records, Chicago's outstanding alt-country label that is home to a few of my favorite musicians and an endless source of interesting music that is hard to categorize.

The show started with "Dusty Groove" and "We Can't Have Nice Things", the same two songs that also open Kelly's new album. Even without the sounds of Booker T Jones' organ that is featured so prominently on the album, the songs sounded good, thanks to Kelly's outstanding backup band, made up of these fine musicians:


I particularly liked Jim Elkington's guitar playing. Kevin's subdued drumming and Casey's bass guitar created a groove that was not unlike that of Kelly's studio recordings.


Kelly gave credit to each and every songwriter whose tunes she chose to play and there were quite a few big names among them: Robbie Fulks, John Wesley Harding, Robyn Hitchcock, Vic Chesnutt, Jon Langford and Margaret-Ann Rich, also known as Mrs. Charlie Rich. The latter's "Pass On By" was one of the many show highlights, or as my friend Bill put it, "this song by itself was worth the admission price".

Immediately after delivering Vic Chesnutt's "Ways Of This World", she followed up with an a-cappella rendition of Vic's "Soft Picasso". Very nice. Surprisingly, Kelly also sang "Just Once In My Life" the Righteous Brothers classic penned by Gerry Goffin and his then-wife Carole King.

But Kelly is much more than "just another pretty voice". "Sugarbowl" and "Golden", her compositions from 2001 and 2012, respectively, were at least as good as anything else we heard last night.

All-in-all, Kelly's show was pure delight, from start to finish. I hope and pray for a return engagement, the sooner, the better. 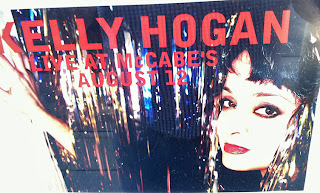