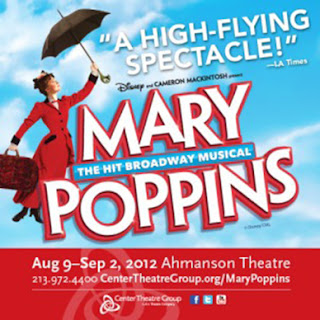 Less than a year after attending the fabulous Broadway production of Mary Poppins in New York, I couldn't resist the temptation of reliving the experience, so I shelled out the big bucks and got myself three front row seats at the Ahmanson Theatre in Los Angeles. Unlike in New York, having front row seats was an absolute necessity, as I was planning to bring along my grandson Austin, who at the age of almost eight was certainly old enough to appreciate the whole affair.

Unavoidably and also unfairly, I couldn't help but compare what I saw Wednesday night at the Ahmanson with last year's Broadway show. Although with somewhat different stage setups and all new actors, the two productions were quite similar, so the surprise element was not there Wednesday night. But no matter, I enjoyed both shows in equal measure and I'm happy to report that Austin immersed himself totally into the show and was quite impressed with everything in general and the special effects in particular.

I was hoping to see Gavin Lee once again - his portrayal of Bert on Broadway was nothing short of sensational. Well, there wasn't Gavin Lee, but there was Nicolas Dromard, whose Bert was also great. Rachel Wallace looked and sounded good in the title role. I also liked Michael Dean Morgan and Elizabeth Broadhurst in the roles of Mr. & Mrs. Banks, respectively.

Come to think of it, I liked all performers, but the actor who stole the show was Q. Smith, who played both the dreadfully mean Miss Andrew and the gentle Bird Woman, two roles that require opposite acting and singing skills.

The kids were played by Julianna Rigoglioso and Eli Tokash and both were up to the task. Interestingly enough, the show's official printed program listed two pairs of kids and neither of them were Julianna and Eli.

The music was great, especially the original songs written by the Sherman Brothers. Of the newer material, "Brimstone and Treacle" was the best, thanks to a great extent to Q. Smith's powerful delivery.

Sitting in the front row was an experience in itself. The stage was not exceedingly wide, so we had no trouble following the action. Seeing everyone's facial expressions just like one would see them on TV was very special and getting to occasionally peek into the orchestra pit was an added bonus. 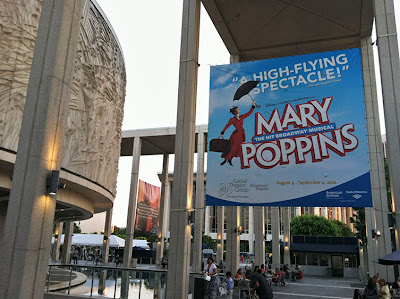