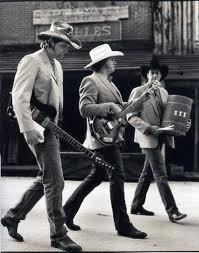 This was my 25th time to see the Boys From Cochtotan in a headlining role. Most reasonable folks would say that I'm insane and maybe I am, but this is the kind of insanity that's perfectly fine to leave as is. For me, watching Jackshit live remains an exhilarating experience unmatched by anything else I've ever seen. For those of you unfamiliar with the band, here's who the members are:


Last night's sold-out show was - what else is new? - exceptionally good, even though there were no surprise guests. Val and Dave were their usual funny selves, while the typically more reserved Pete was unusually smiley and talkative. Val's guitar playing was out of this world and so were Dave's two bass solos. Dave also outdid himself with a few soprano falsettos that were both powerful and comical. Pete's finest moments came during the singing of "Lazy Day" and the epic grand finale of Johnny Horton's "I'm Coming Home", a song that invariably brings the audience to its feet.

The Shit Horns reported to duty as they often do, making their entrance from the back of the room while playing the trumpet parts of "Ring Of Fire". They followed up with a rousing rendition of Herb Alpert's "The Lonely Bull", a song that appears as "Lonesome Bull" on the band's set list. The Shit Horns came back a few songs later to help with the playing of "Ghost Riders In The Sky" and the "Theme From The Magnificent Seven", both new additions to the band's repertoire. There is a family connection between the latter song and Val McCallum, as Charles Bronson, Val's step-father, was one of the main protagonists of "The Magnificent Seven", the monumental film from the early 1960s.
By the way, Jackshit's rendition of the song was particularly good.

There was one other new number last night, "Tulane", a song instantly recognizable as one of Chuck Berry's. Among the old favorites, "Pretty Polly" and "Ugly And Slouchy", complete with its fabulous rock & roll medley, received the best crowd response. Dave's vocal performance on "Jesus Is Just Alright" was yet another highlight in an evening that wasn't short of highlights. Playing a vibraslap, Charlie, Dave's son, made a brief appearance.

Quite compulsively, I keep telling everyone about Jackshit's marvelous live shows and, modesty aside, I have results to show. Over the course of a few years, I have brought to McCabe's a grand total of one hundred and six friends to see the Boys from Cochtotan. Many of them have become "repeat customers" who in turn have spread the word further. Last night's newcomers were my coworkers Daniel and Chris, as well as Rachel, Chris' wife. They all had a blast.


Jackshit's next appearance at McCabe's will be their annual Christmas concert in mid-December, which is guaranteed to sell out.