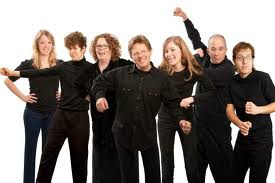 Last night's incarnation of "O'Brien Party Of Seven" featured a grand total of six musicians, yet - in spite of the shortfall - there was still plenty of talent on the stage and I don't think anyone in the audience at McCabe's felt shortchanged. The uncontested leaders of the gang were Grammy-winners Tim O'Brien and his sister Mollie, but everyone else held their own and the end result was a show with plenty of variety, great vocal harmonies, some stellar mandolin playing and an overall feeling of fun and joy.

Most of the folks on stage were from Mollie's side of the family. She introduced guitarist and singer Richard Moore as "my current husband". Lucy and Brigid, her two daughters, were also there, while Tim brought along his bass-playing son Jackson. The missing "party member" turned out to be Tim's other son, who apparently had decided to forgo folk music in order to pursue a higher education.

It is quite unusual for a show to open and close with the same song, but that's what they chose to do and I'm glad they did, as I really enjoyed their two different renditions of "King Of The Road", Roger Miller's signature song. Most of the songs we heard last night came from their "Reincarnation" album which consists of nothing but Roger Miller tunes, most of them obscure.

The O'Briens and the Moores took turns at lead vocals. Tim soloed on Dylan's "Farewell Angelina" and Roger Miller's humorous "Hand For The Hog", among others. Mollie lead the way on the title track as well as Jesse Winchester's heart-warming "Lonely For A While", which was one of the evening's highlights for me. Brigid was the lead vocalist on "Swiss Maid", a minor Del Shannon hit penned by Roger Miller, who else. Jackson sang "Guv'ment", a song taken from "Big River", a musical with all songs written by, your guess is right again, Roger Miller. Lucy sang lead on "Tall Tall Trees" and she sounded quite good. I must also mention Lucy's piano playing skills.

Some of the evening's finest moments came when all six musicians were on the stage at the same time - their harmonizing was great. With so many vocalists taking turns, the whole evening was a dynamic affair further augmented by their mostly uptempo and decidedly catchy songs, with lots of good humor thrown in for good measure. Tim's mandolin playing was absolutely superb and his voice sounded pretty much like twenty years ago, when I first discovered him.

Other songs worth mentioning are "Shut De Do" and the evening's encore, "Sweet Sunny South", from the repertoire of the Carter Family, both songs featuring the entire clan.

All in all, last night's concert was pure delight, from start to finish. I enjoyed everything about it, even though I heard many of the songs for the first time. I will now start looking for the original versions of these songs and special kudos go to Tim and Mollie, without whom I would have probably never heard these Roger Miller hidden gems. 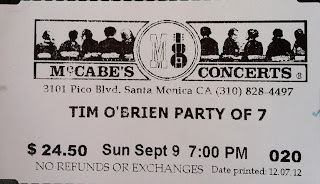