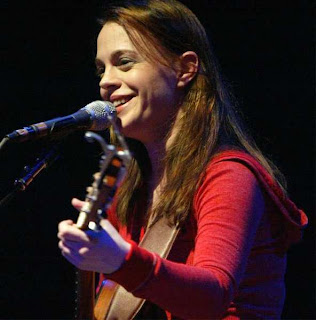 This was my first time to see Mindy Smith live in concert, not long after having discovered her appealing rendition of "Jolene", the classic Dolly Parton song. A few days before the concert, I found on the Internet a couple of in-depth interviews with Mindy. I read them, and, as a result, I went to McCabe's with a certain mental image of the artist. Surprisingly, the Mindy I saw on the stage was a totally different person than the image I had pictured in my mind.

The interviews revealed a serious artist whose creative work has been shaped by the events and emotions of her life, all this while dealing with the stress of having to make a living without the benefit of selling millions of albums. There were no indications in any of those interviews about Mindy's humorous side, and that's the side of her personality that was on display first and foremost at McCabe's last night.

Mindy's stage demeanor reminded me of Peter Himmelman, the  consummate live performer who in my book remains unmatched in a live setting. It's not that I could draw parallels between their styles of humor or music. Their similarity consisted of their unwillingness to remain serious in between songs, even when the involved songs were utterly serious.

While Mindy's playful stage presence marked her show from start to finish, it was her music that made the evening a success. Drawing from her four albums, Mindy's set offered a lot of variety, from slow ballads to up-tempo numbers, with absolutely no moments of boredom. She received outstanding support from her small backup band, namely guitarist Kyle Ryan and percussionist Marc Pisapia, with both Kyle and Marc pitching in on background vocals.

Mindy may be based in Nashville, but to these ears her songs had little to do with the sounds that have been coming out of the Music City in recent years, and that is a strong compliment to Mindy's songwriting. The songs I liked the best were "Come To Jesus", "If I", "Tin Can" and "Closer". I also liked "If I Didn't Know Any Better", a song written by Mindy and recorded by Alison Krauss in 2004.

The evening started with a strong set delivered by Jay Nash, a Vermont-based musician. I was new to his music but that did not stop me from enjoying his songs, especially "Golden State Goodnight" and the set-opener "Never Takes Too Long". Jay possesses a powerful voice that sets him apart from many of today's younger singer-songwriters. 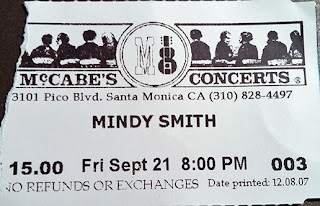