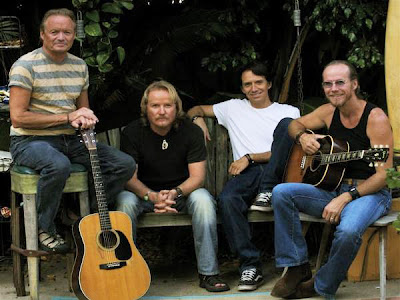 Q: Was this your first time to see Venice in concert?
A: First time, indeed.

Q: How come? These guys have quite a following and have you seen the list of musicians they have played with?
A: Yes, I have, and I'm impressed, but somehow the band managed to stay below my radar for all these years. There's nothing wrong with my radar, but it's just impossible to be on top of absolutely everything that's good in the world of music.

Q: In maximum four words, how was the show?
A: I can't answer in four words.

Q: Why's that?
A: Because last night's show was both boring and engaging. Boring in the beginning and totally engaging toward the end.

Q: Care to elaborate?
A: Well, first let me set the stage. Friday night concerts are tough for me. I'm usually tired after a long week in the office, then it takes me more than an hour to get to McCabe's, so when the show finally starts, I'm in a state of near-collapse. At that point, what I need is a shot in the arm delivered by a high-energy artist who dazzles me with music, wit and most of all, a fast-paced performance.

Q: So you didn't get that last night, did you?
A: Not in the beginning. When we walked in, we saw on the stage four chairs that weren't suggesting anything involving high energy.

Q: Tell me more.
A: The four Lennons, Kipp, Mark, Michael and Pat, came out to a rousing reception, complete with screams of "We love you". They opened with a few slow-ish song, and so it went for a while. To these ears, the show just wasn't taking off and after thirty minutes or so, I felt I'd be in for a long night.

Q: Are you saying they were bad?
A: Not at all. Their voices were great, the harmonies were there, but the music just didn't grab me. The songs, while nicely crafted, carried no punch and the fact that they were all new to me did not help matters. "The Point" was the only song from the first half of the show that caught my attention.

Q: But then something changed, didn't it?
A: Midway through the show, all of a sudden, things changed for me, even though the band kept doing what they had been doing. Songs like "For A Kiss", "The Only Love I Had" and "Fingers Crossed" managed to win me over and from that point on, I found the show quite entertaining and by the time they played the set-ending "Think Again", I was clapping along with everybody else.


Q: Did you like the voices of the Lennons?
A: The answer is yes. I liked both lead vocalists, Kipp and Mark, and the harmonies of the band were good, too.

Q: Did the band members play their usual roles?
A: Yes. They all sang, with Kipp and Mark handling the lead vocal duties. Pat and Michael played a few different acoustic guitars. Michael also played the piano.

Q: How about their personalities?
A: They all seemed to be fun to be around. Their stage banter appeared to be unscripted and was not excessive.

Q: Did they do any covers of famous songs?
A: No, and I definitely could have used hearing a familiar tune or two. I think they wrote all the songs they played last night, with the exception of "When I'm Gone", a brand new Mark Harris composition. Mark was there last night, he played bass and made a good impression on me.

Q: The best song of the evening?
A: My vote goes for the infectious "One More Song", one of the best encore numbers you'll ever hear, a song that is guaranteed to produce a standing ovation.

Q: Any other musician on stage with the band?
A: Percussionist Rich Mangicaro completed the band's rhythm section. He was good.

Q: Did the show sell out?
A: Yes, it sold out weeks before the show. There was a late show as well, also a sell-out.

Q: Can you give me one final assessment of the show?
A: Overall, I'm glad I went to see Venice. I got to see an internationally known band with an exceptional resume. And how often do I get to see so much talent in a single family? It just happened that I was in the mood for some harder-hitting music and it took me some time to accept the softer edges of their music.

Email ThisBlogThis!Share to TwitterShare to FacebookShare to Pinterest
Labels: Venice