Most concerts at McCabe's are quite inexpensive. Tickets for last night's concert, for instance, cost $20 and for this paltry amount I got to see not one, but two first-rate sets. My initial reservations about the pairing of two artists as dissimilar as Anne McCue and David Olney turned out to be totally unfounded, as the resounding success of the concert was primarily the result of the many things Anne and David had in common. Like stellar songwriting. Or the ability to lift the crowd up. Or deliver songs with passion and intensity. Or surround themselves with superb musicians.

Accompanied by string-wizard Sergio Webb and wearing an elegant hat, David Olney took the stage first and played a sixty-minute set that was exceptionally well received by the crowd. I loved it, too, and it did not matter that I was mostly unfamiliar with his music - each and every song sounded great at the first listen and I suppose he wrote them all. David also shined in the "delivery" department, as he masterfully switched from one role to another, at times looking and sounding pretty much like an accomplished stage actor. Oh yeah, he can also play the guitar.

My vote for the best song goes to "Smoke On Ice", with "Postcard From Mexico" and "Turn This World Upside Down" not too far behind.

Sergio Webb's contribution to the success of David Olney's set cannot be overstated.
Whether playing electric, acoustic or just ukuleleing, Sergio added both depth and volume to Dave's performance. He is a devilishly good guitar player and I absolutely loved the way his electric guitar complemented David's acoustic chords.

All-in-all, my introduction to David Olney's music went very well. I will now start paying a lot more attention to David's work and I hope that his studio recordings will impact me as much as his live act.

Wearing a hat that looked pretty much like the one worn by David, the lovely Anne McCue came out with her band and together, they played for a little more than an hour. Just like David's set, there wasn't a single throw-away song among those offered by Anne to her fans. I was very happy to hear a few of my favorite McCue songs, among them "Driving Down Alvarado", "Stupid" and "I Want You Back". There were a few new songs as well, and they all sounded great.


Anne's band consisted of three outstanding musicians, the same ones who played with her in 2005, when I first saw her live, also at McCabe's. The musical chemistry was still there and it was a pleasure observing how much the musicians enjoyed each other's company. There were no flashy solos, as the boys tastefully ploughed ahead as a unit and reached full tilt for the playing of Tony Joe White's "As The Crow Flies" and Anne's own "Hangman". The place went crazy.


I can't emphasize enough how good a performer Anne McCue is and I'm at a loss trying to understand why she does not have a larger following. Only about eighty folks showed up last night to see David Olney and Anne McCue and that baffles me beyond belief. The way I see it, Anne is the complete package - the voice, the guitar chops, the songwriting - now throw in her good looks and delightful Australian accent and what you get is an artist who definitely deserves a much wider fan base.

A few words about the sound: it was outstanding, even though I sat in the front row, much too close to the band. I could clearly hear each and every instrument and everything was in perfect balance. Some credit most also go to drummer Dave Raven, who toned down his playing to a level that was well-suited to the size of the room. 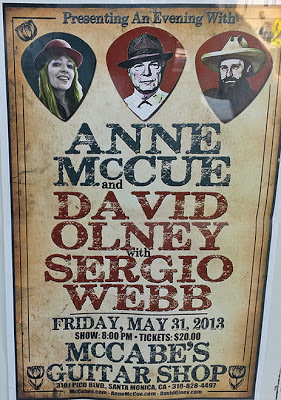