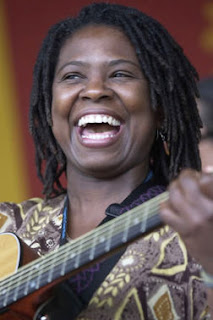 Without exaggeration, the show put on by Ruthie Foster at McCabe's last Friday was one of the finest musical displays I've ever seen on any stage, in any decade. Two days after the show, the spell she cast upon me keeps lingering on. Her disarming smile and the sound of her voice are still here with me, as vivid as they were during the concert.

Ruthie came out without a band and completed the whole show without anyone else joining her. Not that it mattered - she is a strong performer, perfectly capable of holding a crowd captive all by herself, from start to finish, without ever losing anyone. It was a joy observing Ruthie's body language. What I saw there was energy, confidence, a sense of freedom and a healthy dose of humility. Then there's her voice. And her old-school singing style. And guitar playing. And storytelling. And humor. And her songwriting. And her uncanny ability to make my secular self belt out "hallelujah" with the conviction of a church-goer. Well, I could go on and on praising Ruthie and I would probably still fall short of an accurate depiction of her artistry and persona.

Accompanying herself on an acoustic guitar and with due credit given to her early musical influences - Sam Cooke, the Soul Stirrers and Sister Rosetta Tharpe - Ruthie delivered a set that included many of my favorites, such as Terri Hendrix's gorgeous "Hole In My Pocket" and the traditional "Woke Up This Mornin'". One of the evening's most rapturous moments came when Ruthie put down her guitar, left the stage and walked deep into the concert room to sing "People Grinning In Your Face", a cappella style.


I enjoyed watching Ruthie's expressive body language put on display during her a cappella moments. Here are a few photos illustrating what I mean:

The evening's set list included many covers, as well as a few outstanding songs penned by Ruthie herself, such as "Full Circle", "Another Rain Song" and "Smalltown Blues". The covers came from sources as varied as Lucinda Williams, June Carter Cash and Mississippi John Hurt, whose "Richland Women Blues" was a special treat. I also enjoyed Ruthie's much-changed treatment of "Ring Of Fire" as well as her gentle interpretation of Steven Foster's "Oh Susannah".

The set-ending "Travellin' Shoes" was yet another highlight, delivered by Ruthie with full vocal power and total abandonment. The sell-out crowd went absolutely crazy. Ruthie then returned for one final epic delivery, the traditional "Titanic", a performance that still haunts me.

Overall, Ruthie Foster's performance was one of the finest I have ever seen. Everything she did was at the highest level. The way she blends blues, gospel, soul and folk is nothing short of masterful. Throw into the mix her exceptionally likeable personality and what you get is a unique artist whom I will continue to follow with devotion.

The evening kicked off with a decent set delivered by Australia's Jordie Lane. Endowed with a great voice, good guitar-playing skills and a nice personality, he kept me interested for the entire duration of his forty-minute set. Jordie received part-time support from back-up singer Clare Reynolds, introduced by Jordie as "his partner in crime". The song I liked the best was "Black Diamond". 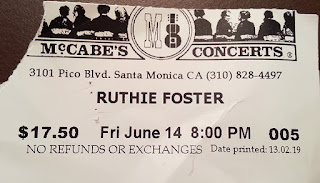