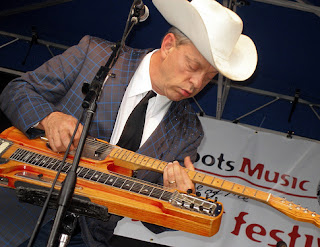 This write-up covers the two Junior Brown concerts I have had the pleasure of attending. The first one took place in October 2000 at the Grove of Anaheim, just a stone throw from the Angels Stadium. The Grove is an OK venue, but not a great one, as it brings together people with different interests - some are there for the music, others care more for the food, booze and socializing. The second show took place last Sunday, in the intimate back room of my favorite venue.

Let me start with the more recent concert. Last Sunday's show started at 8:00 PM, which seems to be the new law of the land for the guitar shop's Sunday night concerts. That's a bit late for most of us and we hope that the organizers will soon switch back to the traditional 7:00 PM start time.

Accompanied by wife Tanya Rae (acoustic guitar and vocals), a drummer and a bass player, Junior Brown opened his show with "Broke Down South Of Dallas", an outstanding song that got everyone going. His deep baritone voice has not changed much over the years and neither has his show. Not that a change was in order.

I sat in the front row, so I had a perfect vantage point for observing JB's finger work on his "guit-steel", as he calls his double-neck guitar. In his capable hands, this unique instrument - half electric guitar and half lap steel guitar - produced an incredible array of sounds, among which my favorite was the low-pitched twang that sounded pretty much like Duane Eddy's guitar.

Throughout the evening, JB was all business, cranking out song after song, with practically nothing said in between. Most artists deliver sets that are about ninety minutes long, but few can squeeze in as many songs as JB.

Some say that Junior Brown's vocal range is limited, but Sunday night he did cover quite a range, from ridiculously low notes to high falsettos and even some yodeling. Not bad at all. And his guitar playing was phenomenal. I loved the instrumentals, and come to think of it, I loved most everything he did, as most everything he did was high tempo, intense and humorous. There were a few slower moments though, when JB "went acoustic" for a couple of songs. Tanya Rae did very well as the lead vocalist on "Old Fashioned Love", her only lead vocal contribution of the evening.

All in all, the concert had all the elements of a fun evening: a unique artist, an uncommon voice, an unusual instrument, quality songs, high energy, good humor and full focus on music. Getting all this right in front of your eyes was quite special.

A few words about my introduction to Junior Brown's music, which took place in October 2000 at the Grove of Anaheim. I sat about seventy feet from the stage, surrounded by folks with limited interest in the musical part of their evening. JB came out with a rhythm section, but wife Tanya Rae was not there.To me, the highlight of the evening was the so-called "Surf Medley", which went on for almost ten minutes and included bits from a few non-surf songs such as "Apache", "Secret Agent Man" and "You Really Got Me".

I kinda liked most of the other songs performed that night, among them "I Hung It Up", "I Want To Hear It From You", "Gotta Get Up Every Morning" and "Highway Patrol", but everything I heard was new to me, so I needed more time to allow JB's quirky music to grow on me. Overall, the concert was good, a bit short of very good, but it did open an appetite for JB's music, an appetite that has been steadily growing ever since.

Junior Brown's opening act was the Del McCoury Band, a bluegrass ensemble that was good enough to headline. They played a fairly long set, about fifty minutes, and no one minded. I liked the way they huddled around the microphone and took turns to strut their stuff. 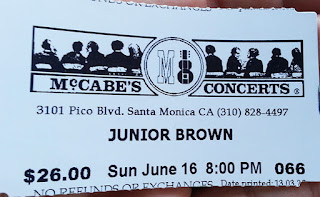