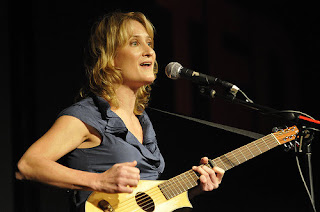 Jill Sobule's concert at McCabe's last week was not very different from her earlier appearances there and that's not a negative. Her formula works for me every time - great tunes, thought-provoking lyrics (Jill has plenty of those), good humor, a sweet singing voice, a couple of unannounced guests. And then there's that joyful look on her face - no one exudes good vibes quite like Jill and in the end, I don't see how anyone could walk away disappointed from her show.


Jill opened her set with "Palm Springs", followed by "When They Say We Want Our America Back", which quickly turned into a hilarious sing-along. Good songs kept coming in quick succession: "Houdini's Box", "Heroes", "Lucy At The Gym", "Wendell Lee", "Somewhere In New Mexico", "Margaret" and a few more. Somewhat surprisingly, we did not get to hear "Where Is Bobbie Gentry", in spite a few requests from the audience.


Jill's first guest of the evening was Tom Brosseau. His performance, albeit brief, made me regret my decision to skip his headlining appearance at McCabe's just a few weeks earlier. Tom played the acoustic guitar, sang backup vocals and then he knocked me out with his solo rendition of "Hallelujah, I'm A Bum", an old pre-WWII tune.

Jill's second guest was Kate Micucci, who happens to be one half of the Garfunkel & Oates singing comedy duo that has achieved a decent level of popularity in Los Angeles. Her delivery of "Walking In Los Angeles", a song she wrote herself, was quite good.

For her one-song encore and in response to my request, Jill sang "Goof Life", a song that drives me crazy every time I hear it. Described as "a happy song about the end of the world", this little gem perfectly captures Jill's boundless joie-de-vivre and sense of humor. 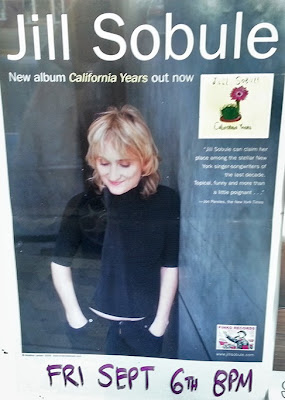