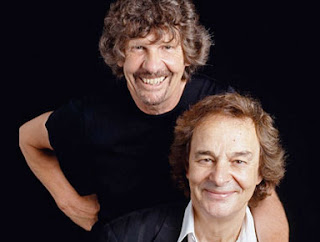 This was a rare weekday show at McCabe's, something that happens only on special occasions, and let me tell you: this show was special. Very special.

I went to McCabe's expecting to see two former glories of the British Invasion who certainly had the potential of disappointing us, if for no other reason than the wear-and-tear of two veteran rock-and-rollers with a combined age of 136. But, as proven many times in the past, age had nothing to do with the viability of the performance I had the privilege of attending last night at McCabe's.

My initial apprehensions were not limited only to the seniority of the protagonists - I had some reservations about the format of the show as well. Acoustic Zombies? How would that work? How would they approach, for instance, "Time Of The Season" and the psychedelic sound of the original recording?

As it turned out, the show was absolutely mesmerizing. Rod Argent went straight to the piano, sat down, and remained seated there for the entire duration of the concert. Colin Blunstone stood at the center of the stage, alone with a microphone stand.


The show kicked off with "Tell Her No", the second big hit of the Zombies. What followed was an appealing mix of songs, old and new, interspersed with a healthy dose of story telling. Rod and Colin turned out to be exceptionally eloquent and quite funny. And they had plenty of stories to tell, some of which were in response to questions coming from the audience.

Without a rhythm section in tow and with no one else on the stage, Colin's vocals were driven by Rod's exquisite piano playing, which infused new life into the hit songs we all heard so many times on the radio. All lead vocals were delivered by Colin, with Rod providing outstanding harmony backup. Colin hit all the high notes with power and precision - the quality of his voice surprised me and probably everyone else present. In spite of all my initial doubts, the stripped-down version of the Zombies' music turned out to be delightfully entertaining.

The acoustic versions of the hits of the Zombies - "She's Not There", "Time Of The Season" and "Tell Her No" - were definitely among the highlights of the show, but I also liked the newer songs, all of which were totally new to me. The newer numbers that stood out to these ears were "Breathe Out, Breathe In" and "Any Other Way".

The interaction between these old friends was something to behold. Neither of them hogged the microphone, they treated each other as equals and they did it with humor, eloquence and professionalism.

Rod and Colin spoke about their first concerts in the States, their appearance on Murray The K's show in Brooklyn and the valuable help received from Al Kooper, without whom we would have never heard "Time Of The Season". Colin talked about his work with Alan Parsons, then he sang "Old And Wise", a song that Colin recorded in the early 80s for "Eye In The Sky", Alan's hugely successful album.

Usually I prefer more music and less talk, but listening to Rod and Colin deliver their stories gave me as much pleasure as the music they played.

The set ended with a rousing rendition of "She's Not There". Rod and Colin came back for two more songs. First they played an old Zombies tune, "The Way I Feel Inside", then they wrapped up the evening with Gershwin's "Summertime". Both sounded fabulous, especially the latter. When the lights went back on, I turned to my friend Steve and uttered two words: "Absolutely superb". No better way to capture my feelings about the performance of these two consummate professionals.

Et Tu Brucé, a British band of considerable talent, played a short opening set, six songs in all. Their all-acoustic performance was a notch or two less engaging than their mostly electric studio recordings I had previewed on the band's web site and YouTube. "Never Say Trevor Again" was the song that I liked the best. 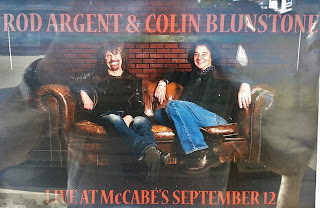