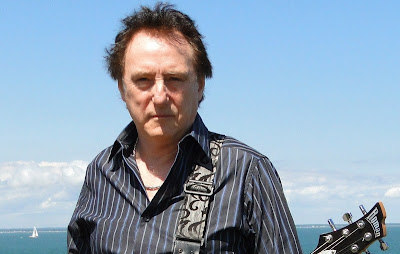 Q: So last week you witnessed a British Invasion of sorts.

A: Indeed. Three days after the outstanding show of the acoustic Zombies (Rod Argent and Colin Blunstone), I saw Denny Laine perform at the very same venue. Casual fans don't know much about him, but the solo career that he embarked on after the dissolution of the Wings is still going strong.

A: He is one month short of his 69th birthday, yet he is still capable of putting on an entertaining live show. He sang well and his energy level was quite high.

A: No, he came out with a band, four musicians in all - trouble is I did not catch their names, not even a single one. I hope one of the readers will email me their names, I'd love to know who they were. Anyway, the band consisted of a guitarist, a keyboard player, a bassist and a drummer. They were all very good.

Q: So how was the concert?

A: It took me some time to "get the feeling". Four songs into the show I was just sitting there, unaffected by the events, questioning the wisdom of my decision to show up. The dueling electric guitars that comprised the instrumental part of "No Words" was the first noteworthy moment of the evening. Then things started to click. Everything that followed "No Words" was top notch and the "grand finale", the two Paul McCartney mega-hits, brought everyone to their feet.

Q: How was the band?

A: They were outstanding. No flashy solos, just lots of teamwork. I loved Jeff Alan Ross' faux-bagpipes on "Mull Of Kintyre" and his equally artificial French accordion on "Boulevard De La Madelaine", which happened to be the third Moody Blues song of the evening ("Go Now" and "I'll Go Crazy" were the other two).

Q: Was there a set list and did Denny stick to it?

A: Yes, there was a list, but it wasn't followed to the letter. The encore was "Band On The Run", not "Live And Let Die" and there was one other minor detour.

Q: Did Denny talk about Paul McCartney and his years with the Wings?

A: Yes, he did, but not excessively.

A: "Go Now" and "The Ghost Of The Scrimshaw Carver" were excellent, and so were the Paul McCartney covers, without exception. I also liked "Baby Blue", the Badfinger hit of the early 70s, sung very well by Jeff Alan Ross while accompanying himself on acoustic guitar.

Q: Was there an opening act?

Q: Anything else worth mentioning? 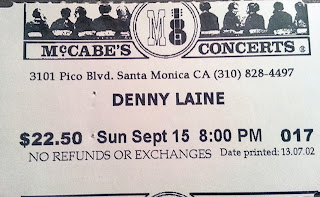