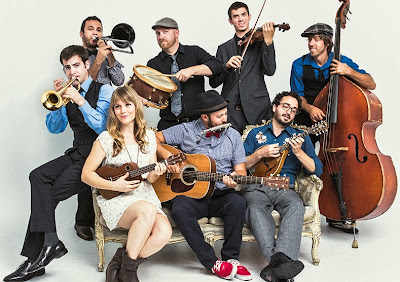 This was my fifth time to see the Dustbowl Revival since March 2012. Yes, I'm a fan, and a huge one at that. Friday night I came with a group of ten buddies which included a lady visitor from faraway India. I just can't help it - whenever I see something that, musically speaking, is out of the ordinary, I feel compelled to bring along more and more of my friends, so that hopefully they get the same pleasure I get. So did they? Read on to find out.

In this blog, opening acts typically get mentioned toward the end of the post, when I'm done writing about the headliner. It takes somebody special to make me break this rule and the T Sisters were most definitely special. Their forty-minute opening set was a delight from start to finish. With their gorgeous vocal harmonies and the old-time feel of their self-penned songs, the three T Sisters - Rachel, Chloe and Erika Tietjen - were received exceptionally well by the crowd. I liked everything they did, but what impressed me the most was the quality of their songwriting. Other than Paul Simon's "American Tune", I believe they sang nothing but their own material and there was enough variety there to please everyone. For the last few songs, the sisters were joined by a few members of the Dustbowl Revival and they sounded great together.

The Dustbowl Revival opened their set with "Won't You Tell Me So", an uptempo dixieland number and uptempo remained pretty much the theme of the evening. What followed was a veritable avalanche of fantastic music played with total abandon, with countless rousing solos delivered by each and every band member in a clear display of musical democracy. Caught in the frenzy generated by the band, bassist Josiah Mory attempted to play his upright bass like a guitar, it was a blast.

The female vocals were handled by Liz Beebe, a new addition to the band. Her singing of "Riverboat Queen" was one of the many highlights of the show. I also liked her contribution to the evening's quietest moments, namely her duets with Zach Lupetin. Standing right at the edge of the stage, they sang two old cowboy songs. I knew the first one, "My Rifle, My Pony And Me", a tune sung by Dean Martin and Ricky Nelson in the movie Rio Bravo. I was unfamiliar with the second one, which was most likely titled "Rodeo Joe".

The band strayed away a bit from the studio version of "Dan's Jam" and I loved the faster pace of the live rendition. We did not have a chance to applaud as the band transitioned straight into "Orange Blossom Special", complete with Connor Vance's pizzicato and a devilishly fast pace that drove everyone crazy.

The contribution of the band's brass section cannot be overstated. Ulf Bjorlin (trombone), Matt Rubin (trumpet) and Nate Ketner (sax and clarinet) played their hearts and lungs out, I had a blast listening to them.


Other highlights: "John The Revelator", "Soldier's Joy" and "Whiskey In The Well", the latter featuring a great drum solo by the mostly hidden Josh Heffernan as well as a washboard interlude delivered by Liz Beebe.

Invited by Zach to join the revivalists, the T Sisters returned to the stage to provide backup vocals for the singing of "Swing Low, Sweet Chariot". It was the most moving moment of the evening. But the band wasn't done: one after the other, all musicians stepped down onto the floor, from where they delivered three more songs that ended with "When The Saints Go Marchin' In".


Without exception, all of my friends loved the show. And how could they not?  How often one get to see so much talent and so much energy right there, in front your eyes?

I went home totally exhausted by the boundless energy of this incredible band and, needless to say, I can't wait to see them again. As for Zach Lupetin, the leader of the collective, I'm in awe of his talent. I hope more and more folks will get to see and hear what he does. 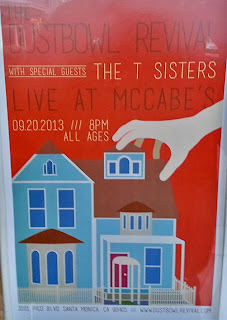 Email ThisBlogThis!Share to TwitterShare to FacebookShare to Pinterest
Labels: Dustbowl Revival (The), T Sisters (The)