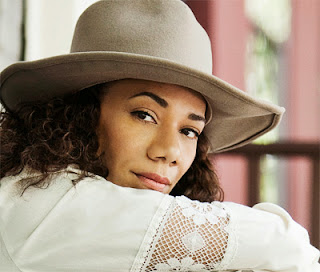 Presented by Pasadena's Levitt Pavilion for the Performing Arts, this was a free concert that took place at the gorgeous Scripps College located in the equally gorgeous city of Claremont. Elizabeth Levitt Hirsch, the sponsor of the Levitt Concert Series, is a Scripps College alumna, hence her inclination to bring live music to her alma mater.

Until not too long ago, "Martha Redbone" was just a name I would occasionally see here and there on the Internet. I showed up at last night's concert strictly on the strength of a few randomly picked YouTube clips - the videos were good, but seeing the vocal powerhouse that is Martha Redbone in a live setting is a different matter altogether.

Martha's voice is something to behold. She's got range. She's got power. She's got soul. With her outstanding ability to control her voice, she can be gentle, loud, passionate, you name it, and I can go on and on praising her vocal abilities without overstating a thing. Yet Martha is much more than just a great  voice - her warm and humble personality impressed me at least as much as her singing ability.

Most of the songs we heard last night came from Martha's 2012 album titled "The Garden of Love - Songs of William Blake", produced by an old favorite of mine, John McEuen of the Nitty Gritty Dirt Band. Not surprisingly, William Blake gets the credit for all the words, while the music credits go to co-writers Martha, John McEuen and Aaron Whitby. The latter also happens to be Martha's husband and longtime musical collaborator, or - as Martha put it - "my partner in crime". All songs of the album are top notch. Go buy it and you will be listening to one of the best releases of the last few years.

As the members of Martha's band took their places, I immediately recognized the often-seen Debra Dobkin, who's probably best known for her work with Richard Thompson. I liked the band, they sounded great.

To these ears, the best songs of the evening were "Garden Of Love", "How Sweet I Roamed", "On Anothers Sorrow" and "This Train". Were there any weak songs? Not a single one.

Introduced as an all-female hand-drum group from Sherman Indian High School, the White Rose Singers performed a twenty minute set at the mid point of the concert. I liked their voices and found their music very appealing.

For the final part of their set, the White Rose Singers were joined by Martha, with the singers forming a tight circle around her. I felt moved by their song, even though I did not understand its message.

About two hundred folks showed up for the concert, which started in broad daylight at 5:30 PM. The proceedings ended just before 7:00 PM, with the sun long gone. All in all, I loved the show and I'm pretty sure that I will see Martha again, someday. 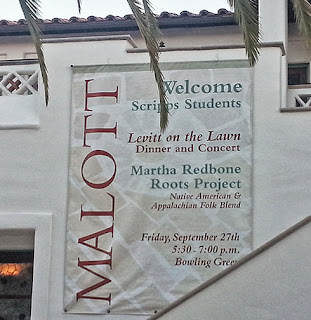