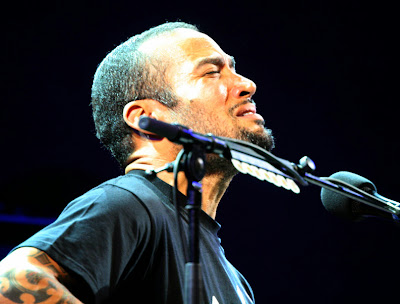 Sadly, there aren't too many world-class concerts happening close to where I live, so typically I have to drive fifty miles or so to get to where the action is. Ben Harper's Wednesday night's appearance at the Bridges Auditorium in Claremont was a welcome exception - being able to leave home at 7:40 PM in order to catch a show announced for 8:00 PM was something truly special.

The concert was a homecoming of sorts for Ben, who lived a considerable part of his life in Claremont. That may explain the surprisingly high turnout - although not officially confirmed as a sell-out, it appeared to me that all 2,500 seats of the venue were occupied. Visibly mixed in terms of age groups, the crowd can be described as loving and certainly knowledgeable.

The concert started at 8:15 PM and ended at 10:45 PM, so we all got our money's worth. There were two encores, which added about forty-five minutes to an already generously long first set. Ben played a variety of stringed instruments (lap steel guitar, banjo, guitars of the electric and acoustic kind, ukulele), and sat down at the piano as well.

To these ears, the unmistakeable star of the show was Ben's voice and I loved his singing style, too. Wednesday night I heard lots of old-school phrasing, but there was always something modern in the way he delivered his music. His diction was perfect - each and every word he said or sang came across loud and clear and yes, the acoustics of the concert hall were great, too.

To me, the best part of the concert was the first encore, which kicked off with stellar deliveries of "Trying Not To Fall In Love With You", "Trust You To Dig My Grave", "Steal Your Kisses" and "With My Own Two Hands", four outstanding songs written by Ben himself. Also during the first encore, Ben duetted with his mother, Claremont's own Ellen Chase-Verdries, a talented singer in her own right. According to Ben, the two songs they sang together - "City Of Dreams" and "Born To Love You" - will be released in 2014 on an album to be titled "Childhood Home".

The song selection was very good overall, but I would have loved to hear a few more up-tempo numbers. As far as I can tell, the overwhelming majority of the songs were Ben's own, with two exceptions: "Fade Into You", and old songs from the repertoire of Mazzy Star, and Leonard Cohen's "Hallelujah".

Set List
The Long Road Home
Welcome To The Cruel World
Excuse Me Mr.
Fight Outta You
Roses From My Friends
Another Lonely Day
Diamonds On The Inside
Forever
Fade Into You
All My Heart Can Take
Lifeline
Don't Give Up On Me Now
Burn One Down
1st Encore
Trying Not To Fall In Love With You
Trust You To Dig My Grave
Steal My Kisses
With My Own Two Hands
City Of Dreams (with Ellen Chase-Verdries)
Born To Love You (with Ellen Chase-Verdries)
Suzie Blue
2nd Encore
Hallelujah
Waiting On An Angel

On the minus side, Ben spoke a bit too much, certainly during his first set. At one point, he went on for seventeen uninterrupted minutes, that was excessive.

Overall, the concert was a memorable event. The sound of Ben's soulful voice and passionate singing still rings in my ears and I have a strong desire to dig a bit deeper in Ben's body of work - I'm sure there are plenty of hidden gems there.