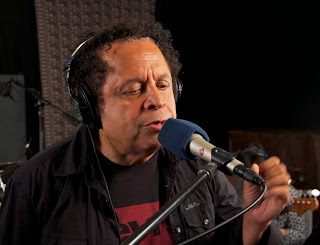 Writing about Garland Jeffreys' concert last night at McCabe's is a daunting task, if there ever was one. Simply put, I'll have a hard time describing the mind-blowing performance of this rock & roller, who, at the tender age of seventy, can run circles around musicians who are half his age. Or younger.

I saw Garland for the first time last year, also at McCabe's. I went to that show not knowing what to expect and he just blew my socks off. Different situation last night, one might think, as I knew exactly what to expect, yet in spite of my much raised expectations, Garland's live act managed to once again knock me out.  I can't think of too many musicians in the "over sixty" category who are as vibrant, energetic and still relevant as Garland. And he sounds great, too - the quality of his voice is something to behold.

No better way to describe the pace of the concert than quoting Garland himself, who - toward the end of the show - told us that "We don't do any ballads anymore, there's not enough time left in life, a ballad is like a waste of time", a statement that served as a signal for the band to launch into a rousing rendition of "96 Tears", possibly the only cover song of the evening. Many of the other songs we heard last night were high-tempo and high-energy songs, soulfully delivered by the indefatigable Garland with frequent shouts of "hey".

Garland's set consisted of songs from all five decades of his career as a recording artist. None of those songs sounded dated. My favorites were "35 Millimeter Dreams", "Hail Hail Rock 'N' Roll" and "'Til John Lee Hooker Calls Me". From "Truth Serum", his latest album, Garland sang "Any Rain", "It's What I Am" and the title track, three songs that measure up favorably to his best material.

Garland brought with him the same band that delighted us last year. Just like then, these guys played their hearts out. While all four band members deserve kudos, I particularly liked Tom's drumming and Adam's guitar playing. Here's the line-up of the band:

Just like last year, Garland told us how much he liked performing at McCabe's. "We love it here. Great place", he said. In return, the crowd gave Garland its full appreciation via an extended standing ovation and applause that went on and on. A couple of times during the show, while singing, Garland left the stage and walked into the crowd, shaking hands and hugging some of his fans.

The encore consisted of only one song, "Moonshine In The Cornfield", performed without the backing of the band.

An incredible moment took place in the venue's front room, after the show, when Garland duetted with a fan on "Christine", one of his songs from 1980's "Escape Artist". Following that, he signed autographs and mingled with his fans.

I went home totally happy, wishing and hoping that I'll get the chance to see Garland again sometime in 2014. 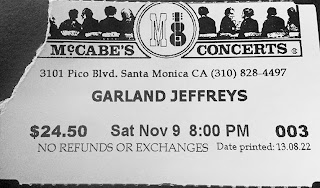