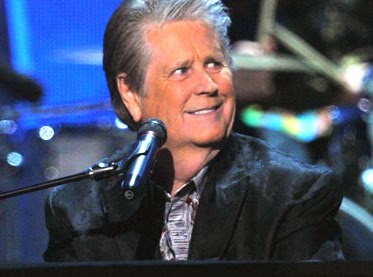 Announced as "Brian Wilson & Friends", this was the fifth annual Carl Wilson Foundation benefit concert, organized at UCLA's Royce Hall. From the moment I saw the concert announcement I knew that a few notable "friends" would show up, and they did.

Over the years, I have had relatively good luck getting decent seats at UCLA. For this concert I sat about seven or eight rows back from the stage, dead center. Not bad.

The most notable friend turned out to be Eric Clapton. He was featured extensively in the second half of the show. First, accompanied by Brian Wilson's band, Eric played  "Stormy Monday" and "Layla", then a bit later he took the stage during Brian's headlining set and once again for the encore.


Led by Mark McGrath, Sugar Ray, the band, delivered a short set that included "Every Morning" and "Fly", their catchy radio hit. They ended the set with "Do It Again", the old Beach Boys song, performed with the participation of Carnie and Wendy Wilson (Brian's daughters and two-thirds of the successful trio appropriately named Wilson Phillips).

Earlier in the evening, In Bloom, a three-piece band that included Justyn Wilson and Carl B. Wilson, the sons of Carl and Dennis Wilson, respectively, delivered a short set that wasn't bad, but did not stand out either. They were followed by their cousins Carnie and Wendy Wilson, who sang "Til I Die" and "This Whole World", but they weren't done - they came back after the intermission to provide back-up vocals for Brian and some of the guest stars.

Brian Wilson's band consisted of the Wondermints, an LA-based power-pop band, reinforced with a few musicians among whom the talented Jeff Foskett stood out. Jeff played the guitar and sang lead as well as back-up vocals on a number of Beach Boys covers. Jeff's singing, especially his falsetto voice, was remarkably good. The band did a great job recreating the many different sounds of the Beach Boys.

Brian's headlining set benefited from the participation of a number of guests: Eric Clapton helped out on "Good Vibrations" and "Warmth Of The Sun", while daughters Carnie and Wendy provided harmony vocals on "God Only Knows". Matthew Sweet and Billy Hinsche sang the lead vocals on "Sail On Sailor", with Brian singing back-up and I was quite impressed with Matthew's singing. The three members of In Bloom came back to sing lead on "Time To Get Alone" and "Forever", the latter being Dennis Wilson's best-known song. Brian's set also included "Help Me, Rhonda", "Wonderful" and "Heroes And Villains".

Other contributors included Van Dyke Parks, who, together with Matthew Sweet, performed "Ride", a tune written by the Wondermints, the accompanying band. Van Dyke also performed a couple of songs from "Orange Crate Art", an album released jointly by Brian and Van Dyke in 1995.

The encore brought together all of the earlier performers, plus Bill Medley, Jackson Browne and America's Gerry Beckley and Dewey Bunnell, who apparently couldn't just sit idle and watch. Seeing these legendary artists on stage alongside Eric Clapton, Brian Wilson and all the others gave me a massive thrill. Together, they played "Barbara Ann", "Surfin' USA" and "Fun, Fun, Fun", with Eric looking the happiest of them all.

After all the guests left the stage, Brian and Jeff Foskett played Carl Wilson's "Heaven" in what turned out to be the final song of an evening that was both unforgettable and exhausting.

The following photos are taken from:
http://www.carlwilsonfoundation.org/walk02/concert02b.htm
(copyright holders: M. Dowdle Head and Rene Diaz)
If requested, I will remove all photos without delay. 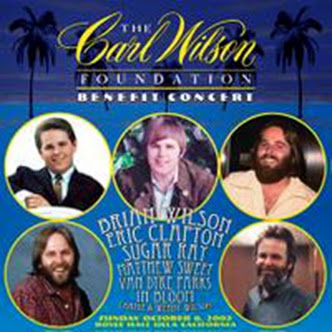