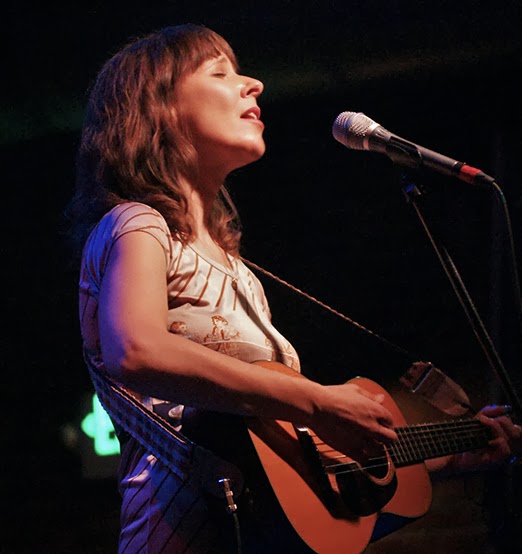 Casual music fans, most likely, have not heard of Eleni Mandell and that's their loss. Friday night at McCabe's, about one hundred fans in the know were treated to a truly wonderful evening of quality songwriting and outstanding vocals, the kind one does not get to hear too often. Eleni's set did not include a lot of up-tempo scorchers, but I thoroughly enjoyed the laid-back feeling that emanated from her slower songs, and when I say slower, I certainly don't mean sleepers, as there weren't any of those.

The set kicked off with Allen Toussaint's "It's Raining", a gorgeous number first recorded by Irma Thomas decades ago. This may have been the evening's only song not written by Eleni herself and what followed was a veritable cavalcade of fine songs, with no throw-aways among them. It's not often that a songwriter's melodic sense and mine are in perfect alignment, but that was definitely the case with Eleni's compositions that she sang for us Friday night.

Then there was her voice. Smooth and warm, always precise and always full of feeling, Eleni's vocal abilities are something to behold. Her sultry and seductive delivery of "Magic Summertime" was one of the show's many highlights, along with "Little Joy", "Home", "Put My Baby To Bed" and the delightfully funny "Chinese Food On Christmas Eve".


Mixing songs from her printed list with audience requests, Eleni brought us in a humorous way into her world, and by the time the show was done, we were all well acquainted with her children, grandmothers and ex-boyfriends.

Throughout the show, Eleni was accompanied by bassist Ryan Feves, a talented and likeable musician who contributed a lot to the success of the show.

With Miley Cirus, Lady Gaga and the like dominating the music news, it looks like it's mission impossible for someone as talented as Eleni to reach a wider audience, but that is something she definitely deserves.

Opening the proceedings was Vikesh Kapoor, a young singer-songwriter of considerable talent. To be successful in his field, one must compose good tunes, write intelligent lyrics, sing well, be at least a decent guitar player and have a great personality. Vikesh did very well in all of these categories. His set was relatively short, seven songs in all, and they were all good. To these ears, "Down By The River", "Bottom Of The Ladder" and "The Ballad Of Willy Robbins" were the best of the lot. At times, Vikesh reminded me of a young Bob Dylan, and that is quite a compliment.