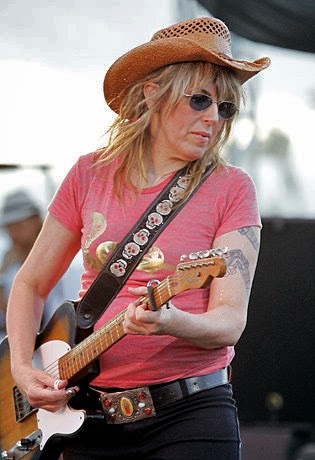 This was Lucinda's second stop on her World Tour of Los Angeles 2014 - good for Los Angeles, not so good for the rest of the world. The event marked my second time to see Lucinda in concert, but only the first time as a headliner.

Carrying an acoustic guitar, Lucinda took the stage all by herself and opened with "Passionate Kisses", arguably her best-known song. For the second song, she was joined by guitarist Stuart Mathis, a long-time member of the Wallflowers, followed one song later by bassist David Sutton, then finally by drummer Butch Norton. These guys were absolutely fabulous - as much as I enjoyed listening to Lucinda, what really floored me was the band. I sat directly in front of Stuart and his amplifier. Watching him play from just a couple of feet away and getting to hear every note he played with outstanding clarity was something truly special. At times, his playing literally hijacked me, as I found myself following his parts with an attention level usually reserved to lead vocalists.

Lucinda was in great vocal form and kept getting better with every song. She pretty much followed her predetermined set list, although we did not get to hear "Still I Long For Your Kiss". I was very impressed with her newer compositions, especially "West Memphis", "Everything But The Truth" and "Burning Bridges". The evening had many high points, among them "Overtime", a Lucinda Wiliams song covered by Willie Nelson, "Lake Charles", a song about an old friend killed by his own lifestyle, and "Side Of The Road", a twenty-five year old self-penned gem. "Concrete And Barbed Wire" sounded great, too. In addition to her own material, Lucinda threw in a couple of compositions by Dan Penn and JJ Cale, but I do not recall their titles.

Lucinda's focus was on her music. She did speak to us in-between most of her songs, but she kept her stories short and to the point. The concert ended at 11:30 PM, so we all got our money's worth. By the way, tickets did not come cheap: at 55 bucks each, Lucinda's gig was one of the priciest ever at McCabe's.


I can't call myself a connoisseur of Lucinda's music, nor can I claim that I listen to her albums all the time. But seeing Lucinda in a live setting is a different thing altogether. The same raw voice that has a lesser appeal to me on a CD, is the real deal for me when she's on stage. In that respect, Lucinda is quite a bit like Marianne Faithfull.
Once again I must mention the quality of Lucinda's band. Butch, David and especially Stuart were out of this world - watching them play was pure joy. I'd love to see them again sometime.

The evening kicked off with the outstanding Kenneth Brian Band, a self-described ensemble of country rock. They sounded great and they looked the part, too. Kenneth possesses a voice that is perfect for the kind of music they play. I liked their overall sound, essentially a pleasant mix of electric and acoustic guitars. I was unfamiliar with their music, yet every song they played sounded familiar without being derivative and even though I would have liked them to rock a little harder, their best song turned out to be "Fall On Me", a slower ballad. The band was joined for a few songs by the attractive Lillie Mae Rische, who played the fiddle and soloed on her own "Wash Me Clean".