Friday night's concert at McCabe's was my first time to see Iain Matthews live in concert and what a revelation that was! Of course, I've been aware of Iain's music for decades, but, regrettably, without ever giving him my full attention. Big mistake.

Iain took the stage, addressed the crowd, launched into an "a cappella" version of "Just One Look" (not the Doris Troy classic), then seamlessly transitioned  into "The Frame". By the time the latter ended, I knew I was in for a special treat and everything that followed was indeed special. Very special.

I had been listening to Iain's just-released new album, "The Art Of Obscurity", so I knew that there was nothing wrong with his vocals, yet the biggest surprise of the evening was his voice. I can't think of too many singers who, at the not-so-tender age of sixty-eight can hit high notes and control their voices as well as Iain can. His phrasing and vocal inflections produced a soulful and expressive sound that was just perfect to these ears. And before I forget: he is a fine guitarist, too.

Equally good were Iain's songs, the majority of which he wrote himself. He also threw in a couple of covers: Jackson Browne's "These Days" and "Can't Buy Me Love", the well-known Beatles gem. I liked the treatment of the latter, even though, inexplicably, Iain altered the words to "won't buy me love".

The aforementioned new album was the source of many of the songs we got to hear Friday night. There were no weak numbers there, with "Ash In The Wind" and "Time Zone Cowboy" being the best. From his older material, "God Looked Down", "Alone Again Blues", "Evening Sun" and "Lamb In Armor" stood out. I also loved "Funk And Fire", a tribute song to three departed musicians whose names were not mentioned in the song. I had no trouble identifying Jimi Hendrix and Janis Joplin, but I had to resort to Google in order to identify Hank Williams as the third unnamed artist.

I would have loved to hear a Richard Thompson cover or two, as Iain's rendition of "Poor Ditching Boy" and "Shady Lies" are among my favorite RT covers. No luck, though.

It is now two days after Iain's appearance at McCabe's and his music continues to obsessively haunt me. Luckily, I found an easy fix: I got myself a ticket to see Iain again, tomorrow night, at the intimate Coffey Gallery in Altadena. Can't wait. 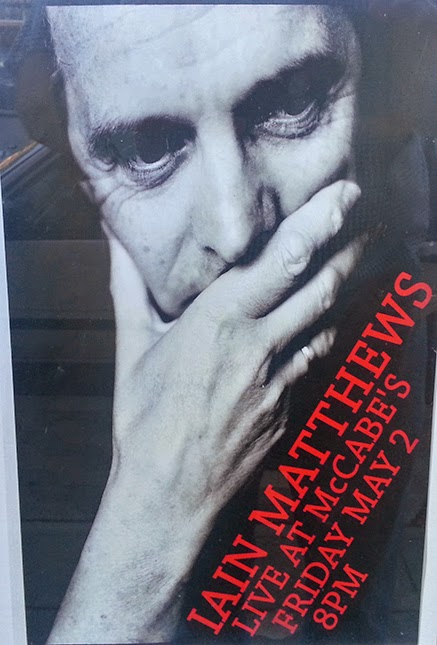 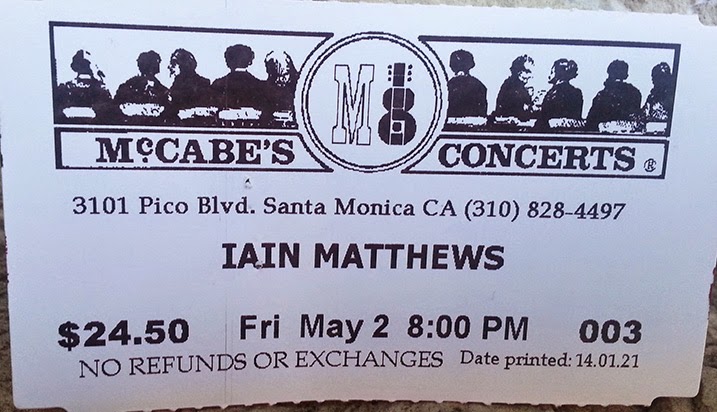