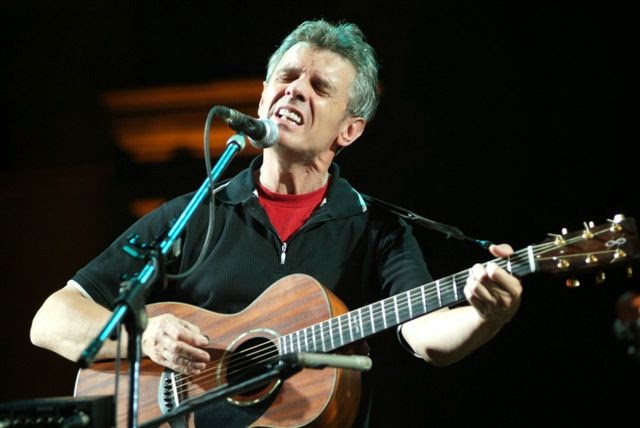 What a difference a concert made ... less than a week ago, Iain Matthews was someone I liked and respected, but nothing more. Then came last Friday's concert at McCabe's, when Iain knocked my socks off with a performance that had all the ingredients that make me melt: a great voice, a soulful delivery of tuneful songs, skilled guitar playing, captivating lyrics, good humor and, to top it all off, humility. His show was so good that I just had to see him again, and that is what brought me Monday night to the Coffee Gallery in Altadena, an intimate venue with just forty-nine seats.

Much to my disbelief, I counted only twenty-six people in the attendance, undoubtedly the smallest concert crowd I have ever seen. But the size of the audience did not stop Iain from delivering yet another great set, twenty songs in all, and all the elements that had impressed me so much at McCabe's were there in full force. In terms of the set list, there was some overlap between the two concerts, something that did not bother me at all. On the contrary, I enjoyed very much hearing "Alone Again Blues" and "Funk And Fire" once again. I also enjoyed the eight songs not played at McCabe's, among which "To Be White", "God's Empty Chair" and Richard Thompson's "From Galway To Graceland" stood out. The a-cappella style delivery of the latter was an absolute gem.

One of Iain's past collaborators, Richard Stekol, an accomplished musician himself, provided able accompaniment on electric guitar for half an hour or so. His subdued playing was a good addition to the show.

After the concert, I had the pleasure of exchanging a few words with Iain and got to shake his hand, too. I went home happy, carrying with me his "Joy Mining" album, purchased from Iain himself.