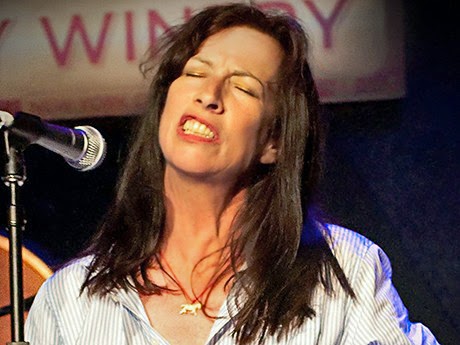 If you're like me, you go to concerts for the music and you are supremely annoyed by musicians who blabber away for hours instead of focusing on music. Excessive talking can drive me nuts and indeed, there are a few singers out there whose verbal diarrhea has stopped me from becoming a repeat customer. But then there are two musicians, and I mean only two, who can talk as much as they want and I won't complain. One of them is Kinky Freedman. The other is Syd Straw.

Saturday night at McCabe's, Syd and her supporting cast played a total of seventeen songs, a fairly normal amount of music for a ninety-minute show, but thanks to Syd's massively talkative mood, the show went on for a little over two-and-a-half hours. Wow! But I'm not complaining. On the contrary, I got thoroughly amused by the non-musical part of her act. Syd's sense of humor is truly unique, quite difficult to categorize, but most definitely enjoyable - my friend Steve put it best, when he described Syd as being "gloriously loopy".


I have now seen Syd Straw five times as a headliner and I must say that Saturday night she sounded better than ever. Her instantly-recognizable voice was strong and she had no problems hitting any notes she wanted to hit.

As expected, her show consisted of mostly her own songs, plus a few well-chosen covers. Here's a list of the cover songs Syd sang for us and, by the way, they all sounded great:

Mutineer (Warren Zevon),
Rocky Racoon (The Beatles)
Femme Fatale (Velvet Underground)
Love Is Everything (Jane Siberry),
(I'd Go The) Whole Wide World (Wreckless Eric)
What Am I Worth (George Jones)

And here are the songs that I believe were either written or co-written by Syd herself:


My Ship Comes In
Papier Mache
Black Squirrel
All Things Change
Marry Me
You Had Your Chance
Pink Velour
By This River
Think Too Hard
Current Of Love
Love, And The Lack Of It

To these ears, the highlights of the evening were "(I'd Go The) Whole Wide World" and "Marry Me", with everything else not too far behind.

Syd came out with guitarist Rob Laufer and violinist Heather Lockie. They remained on the stage for the entire duration of the show. I loved Rob's expressive guitar playing and I enjoyed the warm sounds of Heather's violin - their contribution to the success of the evening cannot be overstated.

For the singing of "Femme Fatale", Syd brought out her old friend Cindy Lee Berryhill, who did a great job with this Velvet Underground gem. Later in the show, Syd added two more musicians to her band: bassist David Jenkins and Don Heffington, a drummer and percussionist with impressive credentials.

And speaking of unannounced guests: for her encore, Syd came out with a happy-looking Dave Alvin, with whom she sang George Jones' "What Am I Worth", from one of George's earliest albums. The song was also recorded by Dave and Syd in 1994, you can find it on Dave's "King Of California" album.

And there was yet another unannounced guest: Carol Burnett. No, America's beloved comedy star did not show up, but Syd's dog did. Inexplicably named after the great artist, Carol-the-Dog watched the entire show from the stage, without interfering with the proceedings.

The show was either sold out or very close to a sell out. There was no opening act. Overall, the evening was more than enjoyable. Syd wrapped up her show with the words "God Bless McCabe's", to which I can only add one word: Amen! 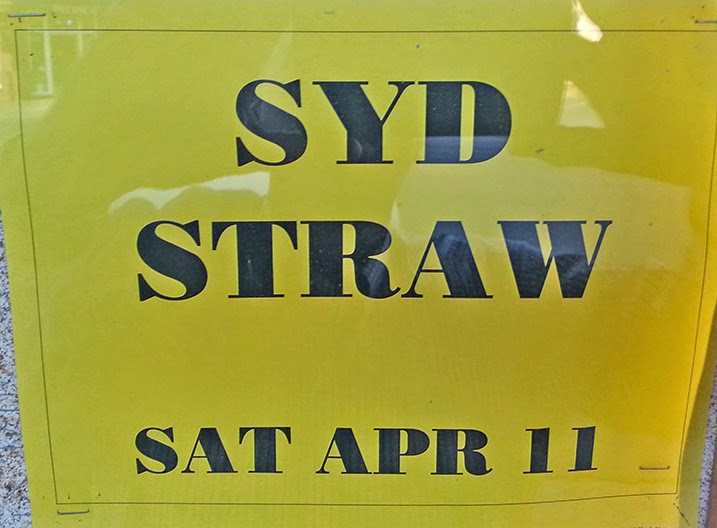