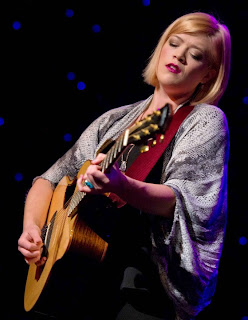 I can't call myself a follower of Liz Longley's music, nor can I claim that, generally speaking, I'm a fan of the vocal style employed by Liz to deliver her songs. Yes, I did take a gamble driving all the way to McCabe's on a busy Friday night, but in the end I was rewarded with an entertaining performance that I may want to experience again in the future.

Stepping away from the microphone, Liz kicked off the evening with a wonderful rendition of "I Wonder Who's Lovin' You" and "You've Got That Way", two songs intertwined into a gorgeous medley. I could immediately tell that Liz Longley live in person was a lot more enjoyable than Liz Longley via YouTube.

Most of the songs we heard were written or co-written by Liz. The ones that stood out for me were "Skin And Bones", "Unraveling" and "Alive Again", the latter being one of the songs inspired by Liz's often-mentioned ex-boyfriends. Her current boyfriend also got a song, "Electricity", and a good one at that.

Supplementing the self-penned tunes, Liz also sang a few covers. Van Morrison's "Moondance", which ended with a few jazzy lines from Gershwin's "Summertime", sounded particularly good. Later on, Liz wrapped up the evening with a gentle version of "I Will", the old Beatles song.

Accompanying herself on the piano and using a somewhat different singing style, Liz delivered three songs - "Electricity", "Only Love" and "Unraveling" - that were some of the evening's best.

New Yorker Anthony D'Amato's opening set had quite a few good songs, the ones I liked the best were "If It Don't Work Out" and "Was A Time". With his pleasant personality and good humor, Anthony is definitely not your average singer with a guitar.