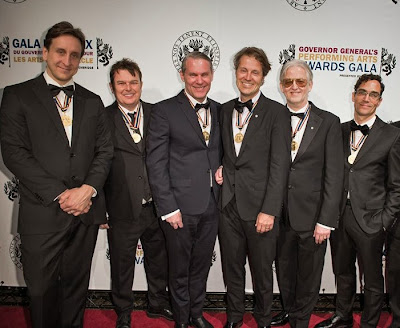 My concert database shows that this was my concert no. 400 at McCabe's, a statistical tidbit that amazes even me, the tireless concert-goer that I am. Such a special occasion called for an equally special performer and, in that respect, Blue Rodeo fit the bill one-hundred percent, as I've been an ardent fan of the band ever since I first saw them live in 2009, also at McCabe's. The boys from Toronto came out as a sextet, with the following line-up:

The show was a sell-out, but with only 150 seats in the house and a ticket price of 25 bucks, there wasn't much money to be made last Sunday night at my favorite venue. Still, that didn't stop the band from giving it all - they put on an exceptionally good show, one of the best I've ever seen at McCabe's.

Both Jim and Greg were in top vocal shape - while their faces did show the passage of time, their voices remained as youthful as ever. Particularly impressive were Jim's vocals on "Try".

I absolutely loved the concert's relentlessly fast pace and the band's extended instrumental interludes did not hurt either. And speaking of the band: they were nothing short of phenomenal - while all musicians had their solo moments, it was their collective work that impressed me the most.

The crowd responded enthusiastically to the music and so did I. Late in the show, someone from the back seats yelled out loud "You guys are good", to which Jim, without missing a beat, replied "We practice a lot", a riposte that made all of us laugh. The band was in a humorous mood, too - even the eternally serious Bazil Donovan, the band's bassist, showed an occasional smile or two.

Show highlights? Too many to list them all ... Jim's voice ... the quality of the songs ... Greg's delivery of "Hasn't Hit Me Yet" ... Mike Boguski's handling of the keyboards ... Glenn's enthusiastic playing of the drums ... I could go on and on ... 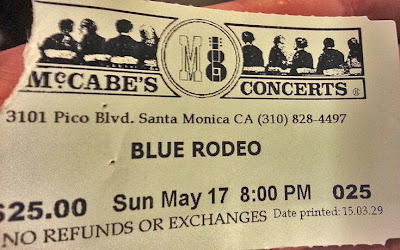