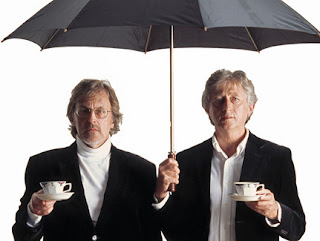 During the duo's heyday in the 1960's, few expected to see the original Chad and the equally original Jeremy performing together in 2016, but that is exactly what we witnessed last night at McCabe's in Santa Monica. Chad & Jeremy are both in their mid-seventies, but the absence of any vocal acrobatics in their hit songs made it relatively easy for them to more-or-less replicate their original soft sound. Alternating between his electric guitar and keyboards, Chad looked somewhat frail, most likely the result of an accident he suffered in 2015, while Jeremy, who looked and sounded a lot more British than Chad, provided more leadership on the stage.

The duo focused mostly on their own material - we got to hear all their big hits, plus a few numbers that were new to me. From among the songs I did not know, the ones I liked the best were "B-Movie" and "Rest In Piece". They also played a couple of covers - we all laughed at their straight-faced delivery of the humorous "Avocado", sung to the tune of "Desperado", the hit song of the Eagles. One of the best songs of the evening turned out to be yet another cover, Jimmy Reed's "If You Leave Me, Baby". Not unexpectedly, Chad & Jeremy ended their set with "A Summer Song', introduced by Jeremy as "the song that started it all".

The evening kicked off with a brief set performed by local musician Andrew Sandoval. At first blush, I thought his songs were OK, but none better than the set-opening "I Can't Be Lonely Without You". I liked very much the violin and cello accompaniment provided by two young ladies. 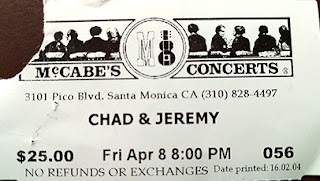