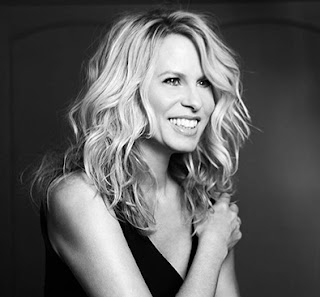 A sentence such as "Vonda is loved by many, but known by few" does not seem to be particularly logical, but somehow, paradoxically, it does ring a bit true. Vonda's appearance at McCabe's sold out in the end, but it took weeks and weeks to get there - this supports the "know by few" part, but let me tell you, whoever was there, showered her with their full love and adulation. Standing ovations are quite frequent at McCabe's, but how often can one witness there a musician performing in front of a crowd that just does not want to sit down? Well, that's precisely what happened during Vonda's final few songs of her set, a strong sign that, indeed, she is loved by many.
I'm not a Vonda Shepard expert. Over the years, I have paid attention mostly to her cover songs, to the detriment of her original compositions, so there I was last week at McCabe's, hoping to hear nothing but covers and frowning a bit every time she launched into a self-penned number. As it turned out, her own material dominated the evening - at first blush, I did like some of her songs, while others would definitely require a few more listens.

I enjoyed tremendously her soulful and passionate delivery of Dan Penn's "Sweet Inspiration" and John Fogerty's "Proud Mary". Equally good were her renditions of "Walk Away Renee" and "Respect Yourself", both well-known radio staples from decades ago.

A few words about Vonda's outstanding band: James Ralston (guitar), Jim Hanson (bass, backup vocals) and Michael Urbano (drums) were very good individually and also collectively, as one would expect from musicians who have been playing together for years. Assuming a somewhat lower-key role, producer Mitchell Froom played his keyboard in the corner of the stage, partially obscured by the other musicians. Vonda sat behind her keyboard for most of the show, but took center stage for a couple of songs toward the end of the show.

Comprised mostly of Vonda Shepard connoisseurs, the crowd responded with enthusiasm to her performance throughout the evening, then brought her back for not one, but two encores, each consisting of one song, first Don Covay's "Chain Of Fools", then finally, the much-covered "You Belong To Me".

It took me some after-the-concert googling to identify Vonda's unannounced guest, namely Jeff Young, who contributed backup vocals and some spirited keyboard playing on a couple of songs.

This concert will be hard to forget. Vonda's voice and singing ability are something to behold and I will never forget her intensity and, most of all, her gorgeous smile. 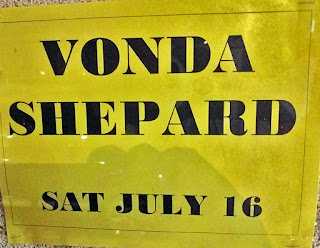