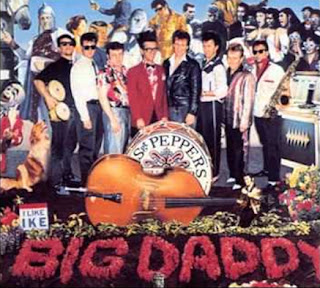 When you need a few good laughs, you head straight to a comedy club and when you're in the mood for live music, you go to a concert. The question is, what do you do when you need a fix of both comedy and music? The answer is simple: catch a Big Daddy show!

I've been a fan ever since I first heard "Money For Nothing", their brilliant Dire-Straits-meets-Tennessee-Ernie-Ford gem, sometime in the early 1990s. A couple of years later - in my head at least - they became huge, with the release of their highly listenable "Sgt. Pepper's" album. Then they disappeared. Fast forward to the latter part of 2016, when seemingly out of the blue, I once again started noticing their name in local concert listings and Friday night, there I was at McCabe's to see them for the first time in live action.

I had a great time at the concert, as I got both the humor and the good music I needed. The band was full of energy and with a repertoire such as theirs, the crowd never had a chance to rest. Tom Lee, Bob Wayne, Don Raymond and newcomer Steve Nieves, they all had their solo moments and they all looked and sounded great. Among the highlights I will mention "A Day In The Life", played with some input from Buddy Holly, "Help Me Make It Through The Night", arranged by the Coasters themselves, and Prince's "Little Red Corvette" which sounded suspiciously like "Beep Beep", the old hit of the Playmates.

George Harrison's "Within You, Without You" is the last song one would expect to ever hear at McCabe's, but then these guys also brought Taylor Swift material into our venerable folk music venue. Indeed, Big Daddy's version of Swift's "Shake It Off", as it morphed into "Shout", the old Isley Brothers gem, was one of the evening's finest moments, as was the mash-up of Big Bopper's "Chantilly Lace" with Willie Nelson's "Always On My Mind".

And speaking of mash-ups: who would have thought that the music of Talking Heads and Harry Belafonte would ever be fused together into one single song? Well, Big Daddy did just that, by humorously merging "Once In A Lifetime" with "Day-O", Harry Belafonte's mega hit from over six decades ago.

Taking over the lead vocal duties and sounding not unlike Johnny Cash, Don Raymond blended "Light My Fire" with "Ring Of Fire" in what turned out to be yet another concert highlight.

McCabe's is not a bad place for celebrity spotting, so guess who was in the audience Friday night to see Big Daddy: Jackson Browne, that's who!

Once again, I had a fabulous time watching these musicians, who I hope are not done touring and recording. 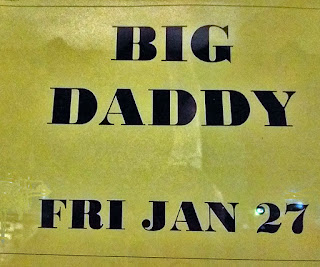