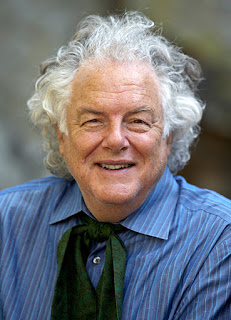 This was my fifth live encounter with Peter Rowan, an event that came exactly twenty-two years after I first saw him - surprise, surprise - also at McCabe's. Yes, years have past, Peter is now in his mid-seventies, still recording, still touring and I felt that I just had to be there to see him, quite possibly, for one final time.

His Friday night show at McCabe's cannot be described as a high-energy event. Not that anyone was expecting it to be. Accompanied by yet another famous septuagenarian, Jack Casady, Peter delivered a fairly long set, ninety minutes in all, and that was only his early show - as he was wrapping up his set, people were lining up out in the street to attend his 10 PM show.

My hopes of hearing a retrospective of Peter's long recording career did not materialize. Instead, Peter played for us his latest album, "Dharma Blues", in its entirety. The music wasn't bad, but there were just too many songs there that I didn't know. By the way, the album was produced by the late John Chelew, who - prior to becoming a producer - was a successful concert director at McCabe's Guitar Shop.

Peter opened his set with "Have You Seen My Aloha", a song that served as his vocal tune-up. In addition to the songs from "Dharma Blues", he also sang "The Ballad Of Ruby Ridge", Elizabeth Cotten's "Freight Train", a few snippets from "Mule Skinner Blues" and "Panama Red".

Late in the show, Peter brought out Katie Skene, a young singer and guitarist who made a good impression on the audience. She sang backup vocals, played the guitar and soloed on Bessie Smith's "Nobody Knows You When You're Down And Out".

The show ended just as I hoped it would: accompanied by Jack and Katie, Peter sang "Midnight Moonlight", his signature song and to me, that was the highlight of the evening.

The sheet left behind on the stage only lists the songs from "Dharma Blues". Surprisingly, Peter's last name is not spelled correctly. 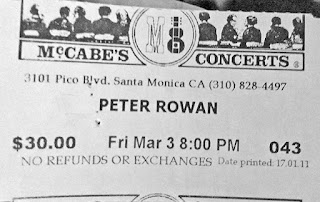