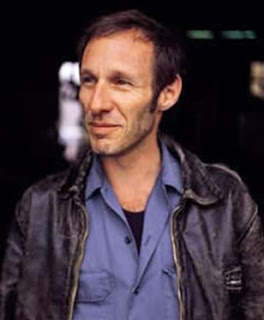 Even though I place "Welcome To The Boomtown" in my Top 10 songs of the eighties, I still can't call myself a connoisseur of David Baerwald's music - this may explain why Friday night I went to McCabe's not only with a strong desire to be pleasantly surprised, but also with a certain degree of apprehension. Spoiler alert: the concert turned out to be everything I had hoped it would be and more.

Nothing is classier than having a headliner introduce his band before anyone played a single note. Most artists handle such introductions late in the game, but it was the first thing David did, as soon as he took the stage. Very nice. Consisting of Brady Cohan (acoustic guitar), Sebastian Steinberg (upright bass), Brian MacLeod (drums) and Steve Lindsey (keyboards), the band contributed a whole lot to the success of the evening - there were no flashy solos, just solid support work of the highest caliber. A post-concert Google search revealed some impressive musical résumés, particularly those of Brian and Steve.

The concert announcement mentioned that David  had not performed live in over twenty years, but I could not detect any signs of rust up there on the stage - he appeared to be relaxed, but also in control. His voice was strong, thunderous at times, as he delivered one great song after another. His songwriting is such that one does not have to know his songs in order to enjoy them - even at first blush, everything David played was instantly accessible to these ears. I also loved David's outstanding guitar playing, as well as his often-humorous interaction with his band.

As expected, David's set list consisted of a mix of songs from his David & David album ("River's Gonna Rise", "Swallowed By The Cracks" and, of course, "Welcome To The Boomtown") and also his solo career ("Compassion", "A Secret Silken World", "Born For Love" and a few others). He also sang "Leaving Las Vegas", the hit song he wrote for Sheryl Crow in the nineties.

For his two-song encore, David elected to sing the unreleased "Stand To Your Rifles" and his "Come What May", the song heard by millions in the 2001 movie "Moulin Rouge". Both sounded great.

I won't even try to pick a concert highlight, as the whole set sounded like one big block of quality songs. Come to think of it, this whole evening was one of those "only in LA" kind of events, when a small group of lucky fans can see top-notch musicians in action, in an intimate room, without having to spend a fortune. 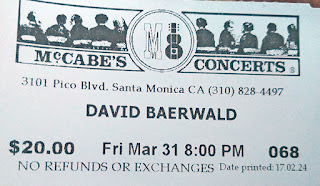