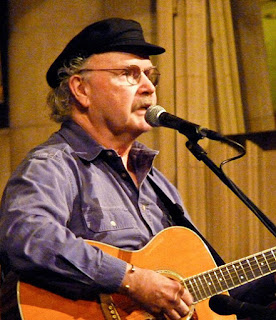 This was my fifth time to see Tom Paxton live in concert and, based on the fine form he demonstrated Saturday night at McCabe's, I'm pretty sure that I'll catch up with him again. At the tender age of seventy-nine, Tom is not ready to call it a career, and why should he? He still sounds good, still writes great songs and certainly has enough energy to complete a decently long concert with a smile on his face. Good for him. Even better for us.

Two days after the concert, the positive vibes I felt at the end of the show are still with me. When thinking about the quality of Tom's newer compositions, all I can do is shake my head in disbelief - his melodic sense is still there and his words are as captivating as ever. One would expect a singer of his seniority to occasionally fumble the lyrics and maybe even scramble to find the right words, but Tom's show progressed without a glitch, from start to finish. Granted, Tom's songs are not particularly difficult to sing, but even so, I was impressed with his precise singing, with all the right notes delivered at the right time.

Indeed, Tom Paxton was great, but thanks to the DonJuans, the show had so much more to offer. Not too many folks know who the DonJuans are, and until not too long ago, I didn't either. Their tongue-in-cheek moniker is derived from their first names, Don and Jon, and not from their unproven amorous conquests. As a songwriting team, Don Henry and Jon Vezner earned a Grammy in 1990 for "Where've You Been", a song first recorded by Kathy Mattea. By the way, Kathy and Jon are married to each other. Many more songs that Don and Jon wrote, either together or separately, got recorded by some of the greatest names in music. Songwriting may be their strongest asset, but they can sing, play a few instruments and make us laugh as well.

The evening was kicked off by the DonJuans, who sang four catchy songs that included the Grammy-winning "Where've You Been" and "Garden Of The Dead", which became a humorous unsolicited sing-along. Then Tom Paxton joined the duo and together they launched into "How Beautiful Upon The Mountains". From that point on, it was one great song after another. Mississippi John Hurt and Dave Van Ronk were each given a musical tribute. Don Henry sang his own "All Kinds Of Kinds", a hit song for Miranda Lambert a few years back.

The place went crazy when Tom invited Paul Stookey to join him for the singing of "Ramblin' Boy", one of Tom's handful of signature songs. Needless to say, Tom did not forget to credit Pete Seeger for having put this great song on the map, in the early sixties.

Unexpectedly, "The Last Thing On My Mind" was given a new treatment and I loved every bit of it. Instead of opening with "It's a lesson too late for the learning", Tom started out with the chorus "Are you goin' away with no words of farewell". Like most folk music fans, I know the words of this gem of a song and it was an absolute thrill to sing along with the one who gave it to us.

The show ended with "Dream On, Sweet Dreamer", a gorgeous song from "Boat In The Water", Tom's brand new album. I went home with a warm feeling in my heart. 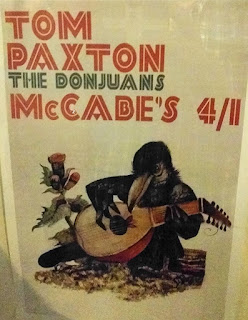