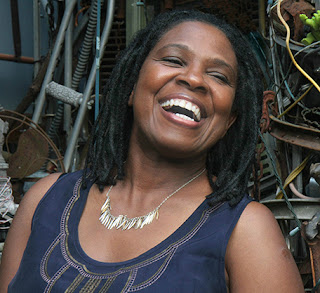 I'm afraid I'll run out of superlatives half-way through this write-up. Simply put, anything and everything Ruthie did last night at McCabe's was at a level of musicianship that can be seldom seen on any stage, anywhere, yet her show was so much more than just great music. With her warmth, humor, humility, and most of all, with her incredible smile, Ruthie put on a show that few other musicians are capable of. With the greatest of ease, Ruthie held the audience in the palm of her hands for almost ninety minutes, a feat accomplished with nothing more than her voice, personality, an acoustic guitar, some captivating storytelling and a massive helping of musical credibility. Indeed, with lots of old-school church music in her DNA, Ruthie picked me up and transported me to a different world, and yes, when she unleashed that divine voice of hers, even my secular self felt the full intensity of the spirit.

My introduction to Ruthie Foster, many years ago, did not go well at all. I first heard of her in 2002, when the Folk Music Center, a historic music store and occasional concert venue in Claremont, California, announced a show with one Ruthie Foster. That was many years before YouTube, so I couldn't check out her singing anywhere on the Internet. Still, one month before the show, I bought two tickets just on the strength of a complimentary article I had read somewhere on the web. One week before the show, I talked two friends into joining us, so I went back to the venue to buy two more tickets. Well, there was a problem, they said, the concert got cancelled. Why? I asked. Because we only sold two tickets, they replied. I pulled out my two tickets from my wallet and asked: You mean these? True story. The good news is that I caught Ruthie the following year, when she performed at the Boulevard Music in Culver City and I've been a huge fan ever since.

Ruthie opened her set with a couple of songs from "Promise Of A Brand New Day", her outstanding new album. She pretty much followed her written set list, but skipped "Richland Woman Blues", "Stone Love" and "Ring Of Fire". Ruthie is a good songwriter - her self-penned "Small Town Blues" was one of the shows many highlights - but she also excels at covering stellar songs written by others. I particularly liked Chris Stapleton's "What Are You Listening To" and Terri Hendrix's "Hole In My Pocket". Patty Griffin and Lucinda Williams were also represented by one song each, "When It Don't Come Easy" and "Fruits Of My Labor", respectively. Ruthie spoke highly of Mavis Staples, before launching into a soulful rendition of "The Ghetto", from the repertoire of the Staple Singers.

For her two-song encore, delivered without even leaving the stage, Ruthie sang two gentler songs, Sam Cooke's "You Send Me" and a slowed-down version of Steven Foster's "Oh Susanna". Usually I prefer shows to end with a thunderous crescendo, but last night, after being treated to a show of unmatched intensity, these final mellow moments provided a smooth return to the real world.

I hope and pray that Ruthie will become a regular performer at McCabe's, a venue that is perfectly suited for her many talents. 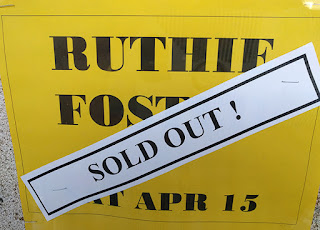