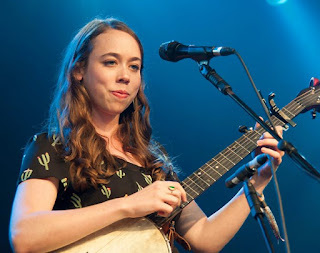 Last weekend, I saw Grammy-nominee Sarah Jarosz in concert for the second time. In many respects, this show wasn't very different from the one I caught in the summer of 2016, also at McCabe's, and that's not a bad thing at all. Once again, Sarah impressed me with her beautiful voice, outstanding singing ability, as well her gift for putting together a set list that kept everyone's attention focused on her offering.

As soon as the show ended, I turned to my friend Steve and asked him the question that had been bugging me the whole evening - I asked him whether he could name the genre that best described Sarah's music. Well, it turned out that Steve, not unlike me, wasn't able to come up with a good answer. Indeed, Sarah's style defies easy categorization, but now that I have had some time to think about it, I have come up with a decent name for what she does: it's "Retro-New-Grass", of course!


Sarah took the stage with Nashville-based guitarist Anthony Da Costa and an upright bass player, Jeff Picker, the same outstanding picker (sorry, I just couldn't resist) who accompanied Sarah in 2016. Together, this great trio delivered a quality set that mixed cover songs with some of Sarah's own compositions. The covers were all exceptionally good, especially Tom Petty's "Time To Move On", Bob Dylan's "Ring Them Bells" and Martha Scanlan's "Raven". I had never heard of Martha, but let me tell you, her song was arguably the evening's best moment.

Many times during the show, the various stringed instruments used by Sarah and Anthony produced an intensely processed sound that was quite a departure from what I would consider "conventional". This is not criticism, just a statement of facts. Look at these photos and you'll see what I mean:

The show also had plenty of moments that sounded 100% conventional, even to the ears of the purest of the purists, and I'll confess that those were my favorite moments of the evening.

Other than the songs I mentioned above, I also liked "House Of Mercy"and "Take Me Back", both culled from "Undercurrent", her most recent album, and her gorgeous "oldie", "Build Me Up From Bones".

The show was a sellout and there was no opening act. Overall, it was a great evening that I would like repeated. 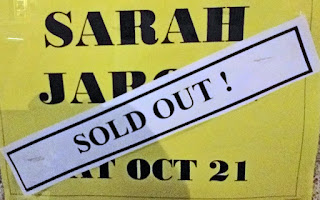