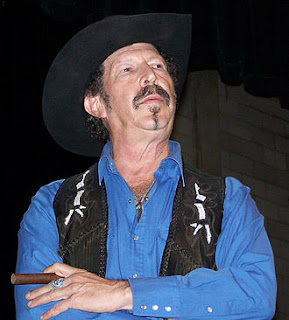 I have seen enough Kinky Friedman shows to know that the old adage of "you've seen one, you've seen them all" is mostly true, but occasionally false, and it's that "false" part that makes me show up every time the Kinkster plays my favorite venue. Well, as it turned out, last night's show deviated very little from Kinky's usual schtick and if you're a fan, you know exactly what I mean: the cigar, the glass of tequila, Bill Clinton, Nelson Mandela, Willie Nelson, the Germans and a slew of jokes that I found quite amusing, while others could called them tasteless. I would have loved to see an unannounced guest or two, but there weren't any. Still, I found the whole experience thoroughly enjoyable.

I caught Kinky's early show, a sell-out. He went on for about seventy minutes, with lots of spoken word and some songs thrown in for good measure. By the way, when Kinky Friedman talks, I do listen and I would have been a happy customer even without a single song.

The evening kicked off with a short set by Michael Simmons, one of Kinky's old cohorts. Accompanied by Don Heffington on percussion, Michael played four songs. The one I liked the best was "Why Can't We Be Friends".