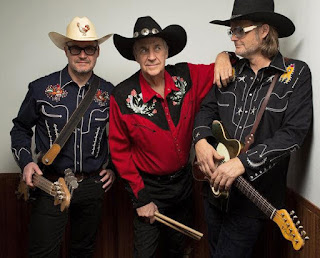 If you don't know jack about Jackshit, just run a simple Google search and I promise that you will be thoroughly impressed by the rich musical careers of Val McCallum, Davey Faragher and Rock-n-Roll Hall-of-Fame inductee Pete Thomas, the three musicians who occasionally perform together under the Jackshit moniker. Or you may read about them elsewhere in this blog.

The band's annual Christmas extravaganza has grown into a cult-like event, with tickets selling out in no time and fans starting to line up at the venue as early as 3 PM. Then there are the rampant rumors and speculations as to who the possible surprise guests might be, so let me jump straight to this year's guests.

Friday night we had Jackson Browne, Jenny Lewis and Molly Lewis. While most of us know a thing or two about Jackson and Jenny, we were all caught by surprise by Molly, who's not a singer, nor an instrumentalist, but has mastered the art of whistling like few others. She delivered two songs: Patsy Cline's "Crazy" and Ennio Morricone's "A Fistful Of Dollars", the spaghetti-western theme first heard in one of Clint Eastwood's earliest movies.

Jackson Browne, a frequent guest of the band, sang "Crazy", "Call It A Loan", "The King Is Gone", "Carmelita", "Take It Easy", "Our Lady Of The Well" and "Lawyers, Guns and Money", one of Warren Zevon's finest songs. This may have been Jackson's best-ever appearance as the guest of the band.

Jenny Lewis delivered a stunning rendition of "Crazy" and her own gorgeous "Pretty Bird". I absolutely loved her voice and singing style, but sadly, she only solo-ed on those two songs. Jenny came back a little later to sing backup vocals on some of Jackson Browne's songs.

Just in case you are wondering why all three guests performed "Crazy" - well, the "Crazy Challenge" is an old routine of the band, whereby amateur singers are dared to take the stage and sing Willie Nelson's gem that is known by most. This time there were no amateur takers, so the professionals had to step in!

For Day 2, the band had a few new guests and also a repeat one. Introduced as the Deershits, guitar and mandolin virtuoso George Doering and his wife Jo Ellen sang Bo Diddley's "Don't Judge A Book By Its Cover" and "The Letter", the song that made the Box Tops famous in the sixties. Most of us, myself included, could not figure out the true identities of the Deershits until after the show, when a Google search took me to the web site of the Brombies, George's Burbank-based bluegrass band.

I was a whole lot more familiar with Saturday's second guest, guitar wizard John Jorgenson. He sang "Daddy Looks A Lot Like Santa", Joni Mitchell's "River" and "Gonna Paint The Town", an uptempo bluegrass number that brought the house down. His guitar playing was something to behold and his singing wasn't bad either.

Saturday's third and final guest - notice, I did not say surprise guest - was once again Jackson Browne, who sang some of the same songs from the day before: "The King Is Gone", "Call It A Loan", "Take It Easy" and "Our Lady Of The Well". I would have loved to hear something else.

But enough about the guests. Undoubtedly, the stars of both evenings were Val, Davey and Pete, who played their hearts out and somehow managed to raise the level of their performance to yet a new high. Cases in point: the expanded version of "Ugly And Slouchy", their incredible rock & roll medley, and Pete's best-ever drum solo on Johnny Horton's "I'm Coming Home". And let's not forget about Davey's high-power vocals on a number of songs.

I counted two songs that the band had not played before and they both sounded great: Tom Petty's "You Don't Know How It Feels" and "Victoria", the old hit of the Kinks.

Val McCallum deserves special kudos for daring to touch a virtually untouchable song, Richard Thompson's "1952 Vincent Black Lightning". I liked Val's version and based on the applause, so did everybody else.

Both evenings kicked-off with a short set delivered by the very young but definitely talented Alex and Brody Gage, whose harmonica playing and singing was very well received by the crowd. They played "Jambalaya", "The House Of The Rising Sun" and an Elvis Presley Christmas song.

By the way, with these two concerts, my current Jackshit concert count is up to thirty-nine. I guess I'm a fan. 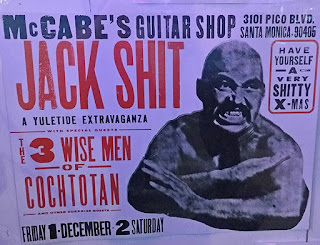