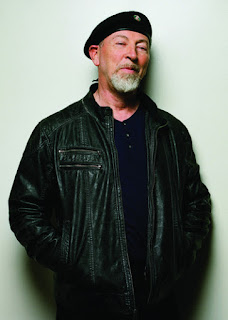 If asked to summarize Richard Thompson's concert last Friday at McCabe's in just one sentence, I'd say that it was a display of undiminished skills by a performer whose next birthday will be his sixty-ninth. Indeed, the passing of time has had little effect on Richard. Twenty-three years have passed since I first saw him live, but I'm yet to see any trace of a decline in his songwriting, guitar playing or singing.

This concert was the first in a series of yet-to-be-announced special shows celebrating the 60th anniversary of McCabe's, Santa Monica's beloved guitar shop, with a portion of the proceeds going to Mr. Holland's Opus Foundation.

The event also marked the end of an era: Lincoln Myerson, the longest-serving Concert Director at McCabe's, passed the baton to Koko Peterson and Brian Rodriguez, two youngsters who have been working at McCabe's for years, but in less visible capacities. My heartfelt thanks go to Lincoln for all he has done for McCabe's and us, the public, and I look forward to seeing Koko and Brian in action.

Richard delivered a generously long set, one hour and fifty minutes in all, and my impression was that he enjoyed every minute of it. He took no detours from his handwritten set list which covered no less than fifty years of his illustrious career.

From his Fairport Convention days, he played "Who Knows Where The Time Goes". From his Linda & Richard period he delivered "Dimming Of The Day", "Tear Stained Letter", "Down Where The Drunkards Roll", "Wall Of Death" and "I Want To See The Bright Lights Tonight". Everything else was from his solo years: a few oldies, such as "Beeswing", "Valerie", "1952 Vincent Black Lightning", "I Feel So Good" and the delightful "How Will I Ever Be Simple Again" and also two brand new, still-unreleased songs, "Push And Shove" and "They Tore The Hippodrome Down".

Faithful to his long-established tradition of including at least one humorous song in his set, Richard sang the hilarious "Hots For The Smarts", a song that makes me laugh every time I hear it. And, by the way, "Crocodile Tears" was funny as well.

Richard's guitar playing was out of this world - case in point: the second half of "Valerie", essentially one rousing extended guitar solo that no one else can deliver with just an acoustic guitar.

Overall, it was a fabulous concert - without any support musicians or guests, Richard kept us mesmerized for close to two hours. Can't wait to catch him again. 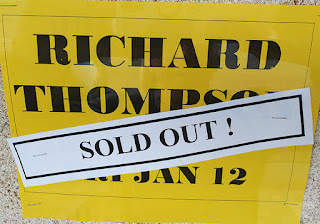 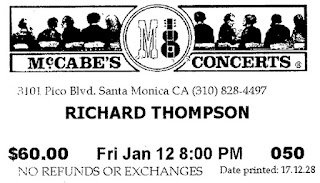