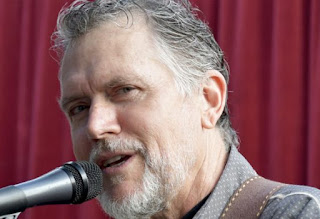 In January 2009, I went to McCabe's to see April Verch, an emerging Canadian singer, fiddler and step-dancer. She was good, very good, but it was the opening act, a certain Brad Colerick, who, as far as I was concerned, stole the show - he played his own compositions and they were all strikingly good. Last Sunday, nine years after my introduction to Brad's music, I got to see him once again, this time in a headlining role.

The evening kicked off with an outstanding set delivered by Chauncey Bowers, who looked and sounded like the quintessential folkie outlaw, but - to my surprise - is a Harvard-educated scientist, now retired. with a Ph.D. in cellular biology ... go figure! With songs such as "The Last Thing I Remember" and with the tasteful backing vocals provided by Lisa Turner, Chauncey kept my attention focused on his music for the full duration of his set.

South Pasadena's Brad Colerick and his band came out without a formal introduction and for the next ninety minutes or so, they delivered one good song after another, most of them written by Brad himself. Two things stood out for me the most: the quality of Brad's songs and his seemingly effortless singing style. Throw in his sense of humor, friendly demeanor and disarming smile and you have got yourself a fun evening.

Brad's band consisted of David Plenn (electric guitar), Tim Fleming (pedal steel guitar) and Guillermo Guzman (bass). They acted as a true support band - their understated solos were well received by the crowd. Toward the end of the concert, Lisa Turner came back to lend her voice on a couple of songs.

Picking a highlight is not an easy task, but Brad's gorgeous "Juarez", as well as "Superhero Of The MTA" and "Almost Home" deserve to be singled out. Equally good was "Tucson", a song written by guitarist Dave Plenn. By the way, in addition to being an accomplished musician in his own right, Dave also owns and runs the The Dinosaur Farm Book & Toy Store in South Pasadena.

There was nothing I did not like about the show, so the next time Brad plays my favorite venue, you can bet that I will be there, accompanied by a few of my friends. 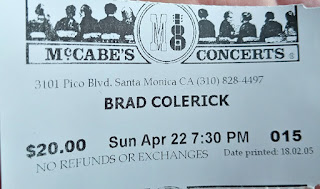