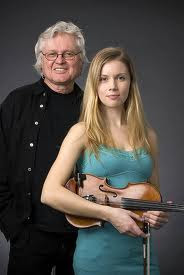 What a concert that was! Combine Chip's incredible songwriting and great delivery with Kendel Carson's youthful singing and fiddle playing, then throw in John Platania and his electric guitar and what you get is an unforgettable evening of music, the kind most of us could only experience at McCabe's.

A few months before the show I started listening to Kendel's excellent debut album, "Rearview Mirror Tears", then two weeks before the show I got to hear her equally good sophomore album, "Alright Dynamite". Chip, Kendel and John came out together and remained together on stage for the entire duration of the concert, with Tony Mercadante helping out on bass.

Wearing one of my McCabe's T-shirts, I sat in the front row, right in front of Kendel, who was sporting, somewhat surprisingly, a Dire Straits T-shirt.

One could clearly see how much Chip and Kendel enjoyed being up there on the stage. They played songs from both of Kendel's albums, plus some Chip Taylor numbers, both old and new. The highlights of the show were "Mercedes Benz" and "I Like Trucks", which quickly became a sing-along. And speaking of sing-alongs: we also got to hear "Wild Thing", complete with Chip telling the audience how he wrote it and who he first played it to: brother Jon Voight.


The second set started with a phone call placed by Chip to his brother, Jon Voight, who was supposed to appear, but was stuck in bed with the flu. Placing his cell phone against the microphone, we could all hear Jon's voice, it was fun.


Kendel's virtuoso fiddle playing took center stage during an instrumental interlude, an old Canadian sea-themed folk song whose title I do not know.
Chip had a couple of guests, Killer Hale & Chester from the Blood  Mountain Boys, an obscure band who had an underground hit called "Yellowstone Thyme". Chip co-wrote the song ages ago but still remembered the words. The final song of the evening was Chip's "I Wasn't Born In Tennessee".
After the show, the musicians mingled with the fans, which gave me the opportunity to shake hands and chat with both Kendel and Chip. To this day I treasure their autographs on Kendel's "Alright Dynamite" CD. What a night!