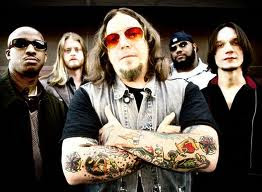 As far as I was concerned, the Hill Country Revue came out of nowhere, but having two-thirds of the North Mississippi Allstars in its line-up, I became an instant fan even before I heard them play a single note. Together with Steve M, I sat in the front row at McCabe's and witnessed a fabulous show that wasn't at all your typical McCabe's fare. Certainly not when Cody Dickinson played his electric washboard.

With songs like "You Can Make It", "Georgia Women" and "Hill Country Revue" they brought the house down, to put it mildly. They played electric, they played acoustic and they made me think often of the Allman Brothers, not necessarily a bad thing. On the contrary.

Daniel Coburn's vocals were great and so was his harmonica playing. Unlike when he's with the North Mississippi Allstars, Cody Dickinson stayed away from the drums - his guitar playing was very good, but he surprised everyone when he picked up an electric washboard and produced some psychedelic sounds that can be described as something truly unique. I was very impressed with Kirk Smithhart's guitar playing skills as well as his humble stage demeanor. Chris Chew played the bass and he played it well.

The highlights of the show were the extended jams, which sounded so great in McCabe's' typically-acoustic concert room. To see what I mean, watch this YouTube video:


The band mingled with the crowd after the show, which gave me the opportunity to have my newly purchased CD signed by four of the guys.