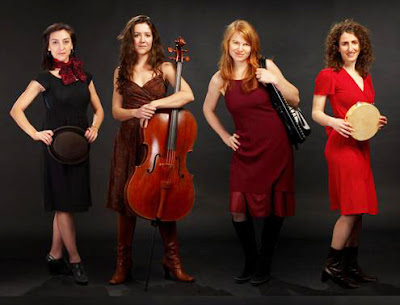 I don't know what to say ... these ladies are talented, no question about that. But I would certainly question their musical choices. Bartok anyone? How about some Macedonian evergreens? Or would you prefer a Hungarian love song instead?

My point is that, when you play music for a living, you don't necessarily have to cater to the center. It is certainly OK to occasionally stray into less-explored musical territories, but why go to the far extremes of Moira & VOCO?

One may say that the show had plenty of variety: Eastern European numbers, mixed with Irish folk songs, body percussion, Appalachian music and indeed, Bela Bartok. Another reading of the same set list may be that the show lacked variety, having consisted of one strange and unfamiliar song after another. I'd say that the latter opinion is as valid as the former.

Hungarian is one of my two mother-tongues, so understandably, I got all excited when Moira announced that they would be singing "Szerelem", a Hungarian song whose title means "love". It turned out that "szerelem" was the only word I could distinguish from Moira rendition, and I'm not exaggerating - everything else was plain gibberish. Long story short, the concert was so-so at best.

The evening started with an unadvertised opening act, Suzy Williams, whose jazzy delivery was well received by the crowd.