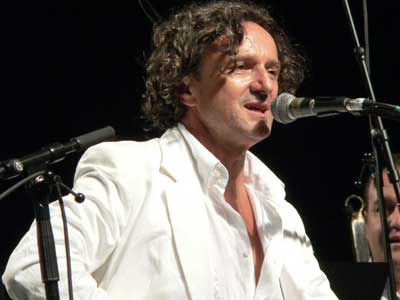 I've known Goran Bregovic's music since 1975, when he was with Bijelo Dugme, Yugoslavia's best-selling rock band during those years. Goran's career is nothing short of amazing - from a rocker only known in his native geographical area, he reinvented himself to become a highly acclaimed musician capable of filling up large venues on all continents and generating an excitement level that is seldom seen.

I have to credit here my old friend Sony (spelled and pronounced just like the famous brand) who in the late 1990s directed my attention to Goran's resurging career and his outstanding "Arizona Dream" soundtrack.

Seeing a European mega-star of Goran's caliber is not something I was going to miss, so I grabbed tickets for each of the two consecutive nights at the gorgeous Royce Hall on the UCLA campus. This was his first-ever West Coast appearance and the place was packed not only with European expats but also with a surprisingly high number of American fans. I had good seats, about five or six rows from the stage.

The show started with an elegantly-dressed string quartet playing a piece of music that can be best described as "classical", when all of a sudden, from the back of the auditorium, a loud six-piece gypsy band walked in, banging their drums and blowing their horns with ferocity. Welcome to the Balkans!  Needless to say, the crowd went absolutely crazy.

Before too long, the stage held an unlikely gathering of musicians: the Gypsy band, a chorus consisting of six tuxedo-wearing men, two Bulgarian lady vocalists dressed in peasant clothes, the aforementioned classical string ensemble and sitting on a chair at center-stage, clad in an all-white suit, Goran Bregovic himself, with his electric guitar.
They went on to play for over two hours, driven by the relentless drum beat of twenty-two year old Alen Ademovic, who happens to be a great singer as well. I also liked the vocals of the Bulgarian sisters Ludmila and Daniela Radkova.
PARTIAL SET LIST
"Jeremija"
"Mesecina"
"Ederlezi"
"War"
"Kalashnikov"
“Cajesukarije-Cocek"
"Gas Gas"
"Ringe Ringe Raja (Ya Ya)"
"Sanctus Deus"
There was plenty of dancing in the aisles and plenty or crowd response - this was not your typical Royce Hall crowd. Toward the end of the show, I moved up to the front row, where I had a blast.
But I also have to make a somewhat negative comment: the two concerts I attended were 100% identical, and I don't mean just the sequence of songs. I mean absolutely everything, including every word and every gesture made by Goran. Maybe there's no room for improvisation when you share the stage with so many other musicians. Still, the two nights with Goran were truly unforgettable.
Posted by Gabe at 9:56 PM