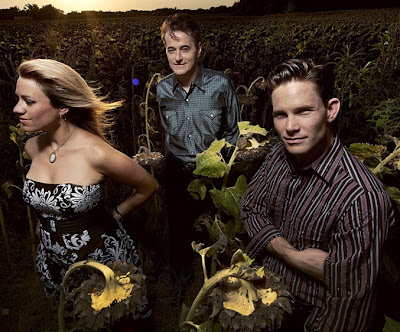 Individually and collectively, these guys are devilishly good. So good, that they must be introduced right away. Here they are:


Elana James - Violin, vocals
Whit Smith - Guitar, vocals
Jake Erwin - Upright bass, vocals
They play hot jazz and western swing. Knowingly or otherwise, they have also pioneered a new genre (wink, wink) known - to me, at least - as "eastern swing", which is what you get when you play Russian tunes in Texas-swing style. In this case, the Eastern-European import was "Dark Eyes", an old Russian song whose original title is "Ochi Chyornye", literally meaning "Black Eyes" (that doesn't sound good in English, does it?). Except for this one foreign digression, the Hot Club played nothing but good home-made numbers, many of them self-penned, and quite a few covers, among which Bob Dylan's "One More Night" stood out.

As far as the tempo was concerned, the band had three speeds: fast, very fast, and ultra-fast. I was amazed by the amount of energy exerted by these fine musicians, song after song - they played two long sets and there weren't more than two or three slower numbers for them to catch their breaths. And they had a lot of fun in the process, it was a pleasure watching their interaction while playing and in between songs.

The Hot Club are a truly cohesive band, yet each and every band member is a stellar soloist. I particularly liked the percussive sounds produced by Jake's bass-slapping technique, something you don't often see.

The final song of their encore, a high-power rendition of "Orange Blossom Special", brought all of us to our feet. Songs like this had a direct effect upon the people's desire to open up their wallets and buy Cowtown CDs, DVDs and memorabilia - their merch table saw a lot of buyers, more than I'd ever seen at McCabe's.


Watch a YouTube video of "She's Killing Me", the song that opened the proceedings at McCabe's: 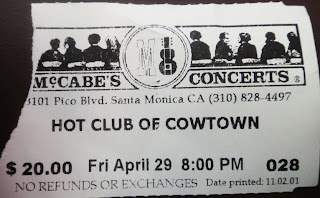 Email ThisBlogThis!Share to TwitterShare to FacebookShare to Pinterest
Labels: Hot Club Of Cowtown