Friday night's concert at McCabe's was yet another proof that YouTube videos and the real world are two different things. The videos I checked out before buying my ticket may have been convincing enough to make me click on the "Buy" button, but they didn't nearly prepare me for the full experience of watching the Doyle and Debbie Show in a live setting. Bruce Arntson and Jenny Littleton, aka Doyle & Debbie, put on an outstanding performance that brought everyone to their feet at the end of the show.

Introduced by Concert Director Lincoln Myerson as a theatrical production, the show was just that, as it came complete with colorful stage decoration, a plot (sort of) and lots of role playing, all built around Bruce Arntson's original country & western compositions. This may all sound like something that could get old pretty fast, but it didn't. The show was very well paced from start to finish and everything about it - the songs, the humor, the delivery - was top notch.

Bruce Arntson's songwriting is remarkable - everything I heard Friday night sounded as good as anything one would hear on country radio, but don't expect to find Bruce's "When You're Screwing Other Women (Think Of Me)" and "I Ain't No Homo" in any radio station's heavy rotation. Or any other rotation, for that matter. Indeed, the show had plenty of sexual themes and situations, but there was nothing cheap and vulgar there, just lots of fun.


If you're like me, you are amused in a loving way by the country music's many clichés. Friday night's show featured a veritable smorgasbord of C&W clichés, cleverly built into each and every song to good comedic effect, with Doyle and Debbie's blatantly over-the-top outfits just adding to the fun.

As I was watching the show, the music of a number of country artists sprang to mind, among them George Jones, Mel Tillis, Jerry Reed and Lee Greenwood, whose "God Bless The USA" was the obvious inspiration behind Doyle and Debbie's utterly funny "God Loves America Best".

The show had many memorable moments. It will be hard to forget Bruce Arntson's frenetic delivery of "Fat Women In Trailers" and especially "Daddy's Hair", which came complete with faux-blood and gun shots. Likewise, Jenny Littleton performance of the witty "ABCs Of Love" will be hard to erase from my memory. 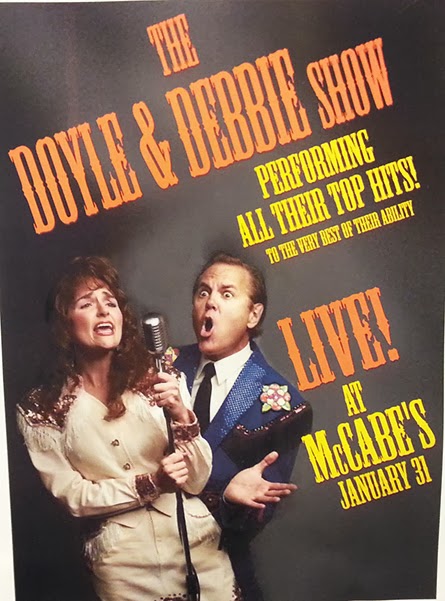