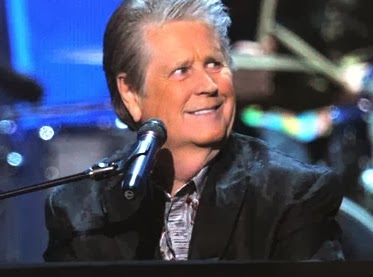 Four years after the exceptionally good show put on by Brian Wilson & Friends at UCLA's Royce Hall, I returned to the same venue expecting to relive the great moments of the 2002 event. Long story short, I went home somewhat disappointed. The show had its moments, but as a whole, it wasn't special. Then there was this young lady sitting right in front of me. It seemed that buying a ticket for her son was cheaper than getting a baby-sitter, so she brought him along. I put up for a while with their endless interaction, but at one point I couldn't hold back any longer and asked her to cut it off. By then, though, my evening had been ruined.

This was the first outing of a short Pet Sounds tour. Fittingly, Brian played many songs from his legendary album, along with a healthy dose of Beach Boys hits. His voice sounded shaky at times, in spite of his band's efforts to beef up the overall sound. Brian remained seated at his keyboard for almost the entire duration of the show.

Wouldn't It Be Nice
You Still Believe In Me
That's Not Me
Don't Talk (Put Your Head On My Shoulder)
I'm Waiting For The Day
Let's Go Away For Awhile
Sloop John B.
God Only Knows
I Know There's An Answer
Here Today
I Just Wasn't Made For these Times
Pet Sounds
Caroline No

Al Jardine's unannounced appearance was definitely one of the highlights of the show. He took the stage while Brian was playing "You're Welcome" and the crowd went absolutely wild. Al took the lead vocals on a few songs and sounded great. Looked great, too. Sometime late in the show, he approached Brian and put his arm around him in a loving way. Very touching.

Brian was accompanied by the same able band that I saw in 2002. They did a good job recreating the intricate sounds of "Pet Sounds", the album.