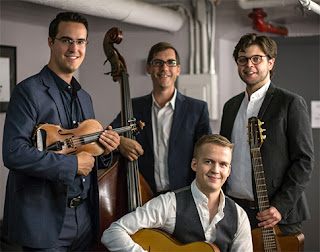 I'm not into jazz, but I do have a soft spot for the sub-genre known as "Gypsy Jazz". Moreover, I'm instantly attracted by concert offerings that make references to Django Reinhardt and that was definitely the case with the Rhythm Future Quartet, a band whose moniker is actually derived from a Django song.

As expected, it was an all-instrumental concert and, as hoped, it was quite entertaining. The four musicians who comprise the band were all superb. Their leader, the classically trained violinist Jason Anick, kept the crowd informed about their songs and yes, he can play with virtuosity. I was also thoroughly impressed with guitarist Olli Soikkeli, originally from Finland, and also with the band's second guitarist, Max O'Rourke. The interplay between Olli and Max, when they were left alone on the stage for a few minutes, was one of the highlights of the evening. Rounding up the band was bassist Greg Loughman, whose solos were well received by the crowd.

The set list included a few jazz numbers I did not know, a few original compositions - the one that stood out was "Olli's Bossa" - and, surprisingly, an outstanding rendition of "Come Together", the Beatles song.

All-in-all, I had a good time getting acquainted with this exceptionally likeable band and their music. 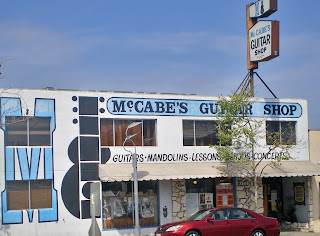