Punk rockers seldom take the stage at McCabe's and that is precisely what attracted me to attend this double-bill in the first place. In retrospect, it was not a good idea. Being unfamiliar with Mike's music did not help. Then there was the decibel level of his performance. In plain English, it was bloody loud.

Mike came out with two Secondmen, a singer/keyboardist and a drummer whose names I sadly do not know. Their energy level was commendable, but the music they unleashed was much too loud. Late in Mike's set, I started to feel some kind of a connection with his music, but then his set ended before I could really get into it. It was certainly an interesting experience, given my minimal prior exposure to punk rock.

After Mike Watt and his band removed all their gear from the stage, it was time for the members of Double Naught Spy Car to set up their respective "work stations" and I had fun observing their preparations.


After Mike Watt's set, I was craving for something more mainstream, but that wasn't in the cards. The band's own web site describes their music as surf noir, jazz on acid, spaghetti middle eastern, and "difficult", and I can confirm that, to these ears at least, it was difficult indeed. The musicians themselves were top-notch, no problem there, but their music did not resonate well with me. 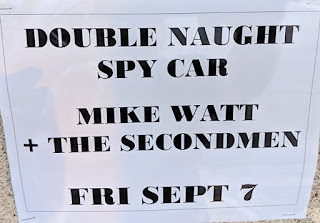