Friday night's concert at McCabe's was a double-header that introduced me to two highly entertaining acts.

The evening opened with a seventy-minute set by Phil Salazar & The Kin Folk, a quintet of graying gentlemen whose musical skills and energy level brought us to our feet. Covering various genres - from traditional bluegrass to western swing to cajun music - their set was very well received by the crowd. With three vocalists and a couple of multi-instrumentalists in the lineup, Phil's band kept things rolling at a high pace, with lots of humorous moments between songs. The band members had plenty of opportunities to strut their stuff via engaging instrumental solos that generated frequent applause.

Even at first blush, their original compositions sounded good - the one that stood out was Tom Corbett's "Fish To Bite". Their set also included a few covers: Ralph Stanley's "Little Maggie", the classic "St. James Infirmary" and "Swing To Bop", the band's one-song encore.
The evening's second set was delivered by the Salty Suites, a genre-bending trio consisting of Chelsea Wiliams (vocals, guitar), Scott Gates (vocals, mandolin) and Chuck Hailes (vocals, upright bass). They are young, talented and energetic. Chelsea knocked my socks off with her vocals, she is something special. Her singing on "I'll Be Fine", a song written by Chelsea herself, was one of the highlights of the evening. Knowing that Chelsea has a solo career, in addition to being one-third of the Salty Suites, I thought that Scott and Chuck were there only to provide instrumental support. Boy, was I wrong.

With his idiosyncratic singing style, great voice and outstanding mandolin playing, Scott Gates was a key contributor to the success of the evening. I loved his rendition of "The Parting Glass", which was the first of the trio's two-song encore. Chuck is a good singer as well, I really liked the way he delivered "Chocolate On My Tongue". The band's entire set, about eighty-minutes in all, was exceptionally entertaining and the crowd responded accordingly.

After his outstanding first set, Phil Salazar came back and played with the Salty Suites for half-an-hour or so. His dynamic interplay with Scott was exceptionally good, especially on "Swing To Bop", a song we also heard during Phil Salazar's opening set and we all had a good laugh when Phil picked his violin like a mandolin, while Scott was using Phil's violin bow on his mandolin.

By the way, the show was either a sellout or very close to being one. 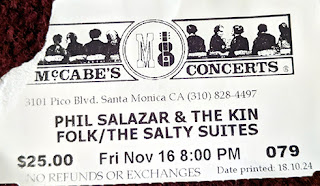