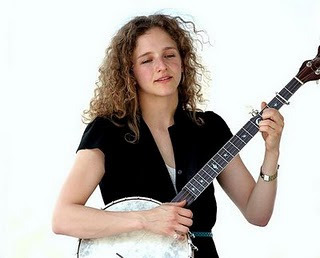 Abigail Washburn's sold-out concert at McCabe's was a pleasant and somewhat unexpected surprise, even though she is not a great singer, nor a virtuoso banjo player. On the other hand, her singing is much better than just "good enough" and so is her banjo playing. Now throw in a band made up of a few talented young musicians and the end result was an enjoyable evening full of good music and overall good vibes.

Abigail is typically described as a "banjo player", so I was expecting some breathtaking solos and occasional displays of virtuosity. Well, the crowd got none of that - her playing was subdued and essentially relegated to the background. But her band was great, and together they sounded quite good.


The presence of drummer Jamie Dick on the stage led to a flurry of dick references, with Abigail taking center-stage, but it was all done in relatively good taste. I liked Jamie's "whistle talk", a short non-musical interlude that was quite amusing.

The highlight of the evening was "Nobody's Fault But Mine". They also played a couple of gospel songs that were very good. There was plenty of variety in Abigail's set, so my mind never had a chance to wander away. I even enjoyed her two Chinese-songs - I usually don't relate well to Asian music and I was stunned to see that her attempts to engage the crowd into a sing-along in Chinese were successful.

Husband Bela Fleck did not show up, but we all went home happy anyway.

I went to the show with George, a Toronto-based childhood friend. It was his first time at McCabe's and he seemed to have liked the experience. 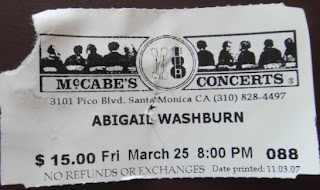