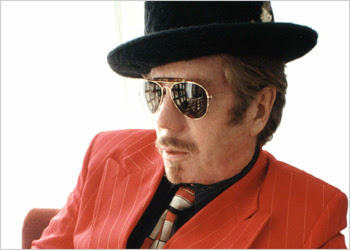 Dan's 2007 concert was announced as "Dan Hicks & The Hot Licks Present A Salute To The Folk Years". That was tempting enough to make me buy four tickets and drag my good friends Bob & Lynne to McCabe's.
The Hot Licks came out with two talented vocalists, Roberta Donnay and Daria, along with guitarist Dave Bell, mandolin and banjo player Adam Gabriel and bassist Paul Smith. Together with Dan, they sang some of the better-known songs from the 1960s, such as "Don't Think Twice, It's Alright," "If I Had A Hammer," the Carter Family's "Jimmy Brown, The Newsboy" and Hoyt Axton's "Greenback Dollar". Between songs, Dan talked about the original artists whose songs he was about to perform.
So why did I mention disappointment in my first sentence? Well, Dan Hicks read most of his stories from a paper that he held up in his hand. I thought that was a bit disrespectful toward his fans - even my mother-in-law can talk about Bob Dylan and Pete Seeger without having to read someone's writeup.
Many of Dan's cover songs did not sound as good as the originals. I know, Dan Hicks is Dan Hicks, his sound is unlike anybody else's and he is not supposed to mimic the originals, but the bottom line is that I did not find his renditions particularly exciting.
But there were a few highlights: "Scotch And Soda", "Jug Band Music", "Feel Like Singing" and "Scare Myself" were quite good.
For the September 2009 show, Dan brought along essentially the same band as in 2007: Roberta Donnay, Daria, Dave Bell and Paul Smith. This time there were no classic folk songs, only typical Dan Hicks songs, with a few exceptionally good extended instrumental parts. All-in-all it was a good show, but not the kind you must see again and again.